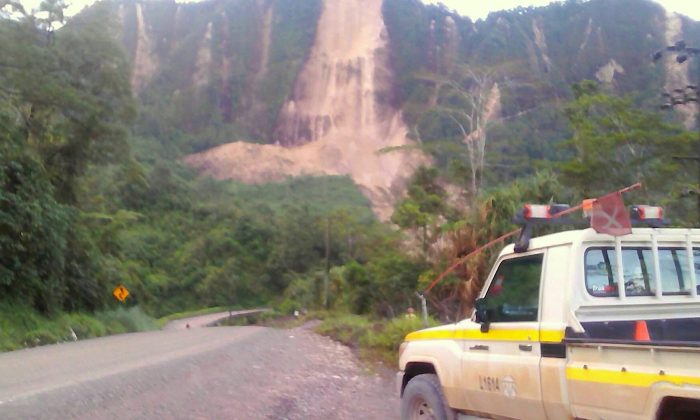 A supplied image shows locals inspecting a landslide and damage to a road located near the township of Tabubil after an earthquake that struck Papua New Guinea's Southern Highlands, Feb. 26, 2018. (Jerome Kay/Handout via Reuters)
Asia & Pacific

MELBOURNE–Up to 14 people were killed in landslides and by collapsed buildings during a powerful earthquake in the remote Papua New Guinea highlands, police and a hospital worker said on Tuesday, with unconfirmed reports of up to 30 dead.

Two buildings collapsed and along with a landslide killed 12 people in Mendi, the provincial capital of the Southern Highlands, said Julie Sakol, a nurse at Mendi General Hospital, where the bodies were brought to the morgue.

“People are afraid. The shaking is still continuing. There’s nowhere to go but people are just moving around,” she said.

Dozens of aftershocks rattled the area, including a 5.7 quake on Tuesday afternoon, the U.S. Geological Survey reported.

Yesterday morning there was a 7.6 magnitude earthquake near Papua New Guinea. In the subsequent ~30 hours there have been (if I’m counting correctly) 29 aftershocks with magnitude 5.0 or greater… Mind-boggling!

Police in Mendi said 14 people were killed in the initial quake, including three in Poroma, south of Mendi.

“They were killed by landslides destroying families sleeping in their houses,” said Naring Bongi, a police officer in Mendi.

Provincial Administrator William Bando said more than 30 people were believed to have been killed in the rugged region, about 560 km (350 miles) northwest of the capital, Port Moresby, the Papua New Guinea Post-Courier reported.

The PNG disaster management office said it was verifying the reports but it could take days to confirm a death toll.

With a lack of communications preventing a clear assessment of damage, aid agencies had not yet begun relief efforts, said Udaya Regmi, head of the International Red Cross in Papua New Guinea, in Port Moresby.

“The magnitude of the earthquake is quite huge, so there must be an impact … but we cannot say how many people are actually affected and what they need,” Regmi said.

ExxonMobil said communications with nearby communities remained down, hampering efforts to assess damage to its facilities that feed the PNG LNG plant.

“Communications continue to be one of the most significant challenges,” the company said in an emailed statement.

Its partner, Oil Search, said a review of all of its facilities and infrastructure would take at least a week, and an industry source told Reuters that the Exxon plant will likely be shut at least seven days.

The PNG LNG project is considered one of the world’s best-performing LNG operations, having started exports in 2014 ahead of schedule, despite the challenge of drilling for gas and building a plant and pipeline in the remote jungle of PNG.

The liquefaction plant has also been producing at around 20 percent above its rated capacity of 6.9 million tonnes a year.

ExxonMobil said it shut the two LNG processing units, or trains, at its site on the coast near Port Moresby after earlier shutting its Hides gas conditioning plant and Hides production pads in Hela province in the highlands region.

Gas is processed at Hides and transported along a 700 km (435 miles) line that feeds the PNG LNG plant, whose main customers are in Japan, China and Taiwan.

Traders said the impact on the LNG market would depend on the duration of the shutdown, but noted that spot prices have recently fallen from more than $10 per million British thermal units (mmBtu) as North Asia is coming out of the period of heavy winter gas demand. [LNG/]

“The global LNG market is likely to respond immediately as the buyers need to seek alternative sources,” said Boseok Jin, a research analyst at IHS Markit.

Barrick said some activities at the Porgera gold mine have been suspended to save electricity as the power station that supplies the mine had been damaged.

The mine is co-owned by Barrick and China’s Zijin Mining.

State-owned Ok Tedi said by email that a landslip had blocked a road and damaged pipelines to its copper and gold mine in the Star Mountains, adding that the road would take up to two days to be cleared.

Earthquakes are common in Papua New Guinea, which sits on the Pacific’s “Ring of Fire”, a hotspot for seismic activity due to friction between tectonic plates. Part of PNG’s northern coast was devastated in 1998 by a tsunami, generated by a 7.0 quake, which killed about 2,200 people.

By Sonali Paul and Melanie Burton