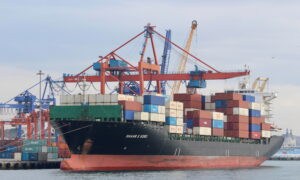 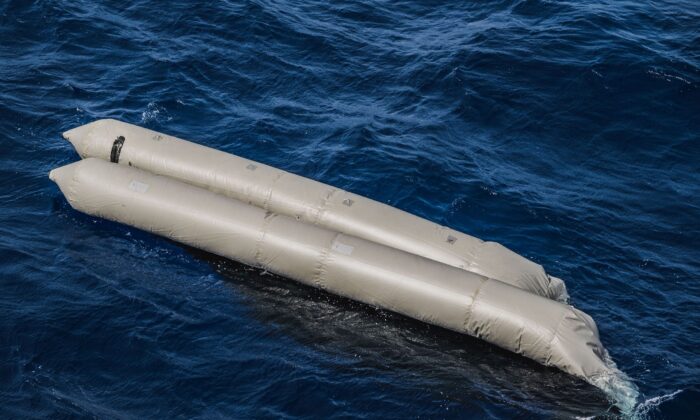 A rubber boat is seen after having capsized with more than 100 migrants on board, during a search and rescue (SAR) operation in the Mediterranean Sea, off the Libyan Coast, April 22, 2021. (Flavio Gasperini/Sos Mediterranee/Handout via Reuters)
Europe

MILAN—Merchant vessels and a charity ship searching the Mediterranean for boats carrying migrants has found 10 bodies floating near a capsized rubber boat believed to have had 130 people on board, French humanitarian organization SOS Mediterranee said.

Another wooden boat was still missing with about 40 migrants aboard, a spokesman for the group said on Friday.

The civil hotline Alarm Phone had reported three boats were in distress on Wednesday, prompting SOS Mediterranee to launch a search “in very rough seas, with up to 6-metre waves,” the non-governmental organization said in a news release issued earlier.

Three merchant vessels helped the charity’s own rescue ship Ocean Viking search for the boats in international waters northeast of the Libyan city of Tripoli.

When Ocean Viking arrived on the scene it did not find any survivors but there were 10 bodies in the water nearby. The statement issued on Twitter carried a photograph of a capsized black rubber boat.

A spokesman for the NGO said he had no information on the third boat that Alarm Phone had said was in distress.

Libya, divided by civil conflict for years, is a major route for migrants seeking to reach Europe.

The U.N.’s International Organization for Migration said that the latest deaths would bring the tally for the central Mediterranean route to close to 500 people this year, more than triple the toll for the same period of 2020.

“States stood defiant and refused to act to save the lives of more than 100 people,” said IOM’s Safa Msehli. “Let it be clear that it is state responsibility to respond to distress calls at sea,” she added.

The U.N. agencies called for reactivating state-led search and rescue operations in the Mediterranean and for a halt to returning migrants to “unsafe ports.”

The IOM said in a report at the end of March that last year more than 2,200 people perished at sea.

The true toll is probably far higher as aid groups reported at least five “invisible shipwrecks” that were never confirmed as they left no survivors.