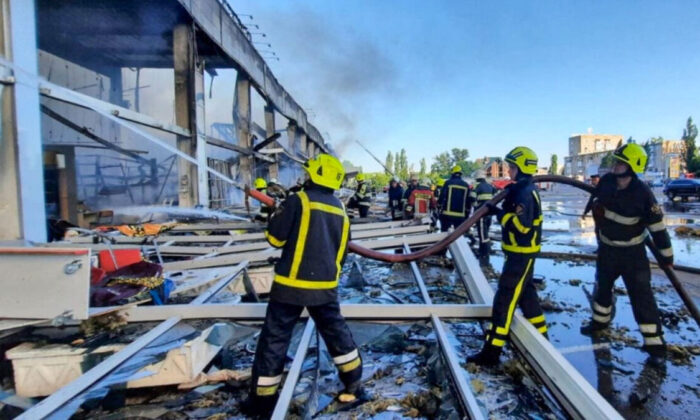 Rescuers work at a site of a shopping mall hit by a Russian missile strike in Kremenchuk, Poltava region, Ukraine, on June 27, 2022. (Press service of the State Emergency Service of Ukraine via Reuters)
Russia-Ukraine War

KREMENCHUK, Ukraine—Two Russian missiles slammed into a crowded shopping center in the central Ukrainian city of Kremenchuk on Monday, killing at least 13 people and wounding 50, the regional governor said.

President Volodymyr Zelenskyy said more than 1,000 people were in the shopping centre at the time of the attack, which witnesses said caused a huge fire and sent dark smoke billowing into the sky.

A Reuters reporter saw the charred husk of a shopping complex with a caved-in roof. Firefighters and soldiers were pulling out mangled pieces of metal as they searched for survivors.

“It is impossible to even imagine the number of victims … It’s useless to hope for decency and humanity from Russia,” Zelenskyy wrote on the Telegram messaging app.

Dmytro Lunin, governor of the central Poltava region, wrote on Telegram that 13 people had now been confirmed killed by the strike, adding that it was too soon to talk of a final death toll as rescuers continued to trawl through the rubble.

Lunin also wrote on Telegram that 21 people had been hospitalized, and 29 others had been given first aid without hospitalization.

“It’s an act of terrorism against civilians,” he said separately, suggesting there was no military target nearby that Russia could have been aiming at.

At one point, paramedics rushed into the building after rescuers called out “200” meaning they had found one or more bodies in the building. Reporters were later pushed away from the scene as air raid sirens wailed again.

As night began to fall, rescuers brought lights and generators to continue the search. Worried family members, some close to tears and with hands over their mouths, lined up at a hotel across the street from the mall where rescue workers had set up a base.

Kiril Zhebolovsky, 24, was looking for his friend, Ruslan, 22, who worked at an electronics store and hadn’t been heard from since the blast. “We sent him messages, called, but nothing,” he said. He left his name and phone number with the rescue workers in case his friend is found.

A mall worker who gave his name as Roman, 28, told Reuters that the mall’s management had only three days ago allowed shops to remain open during air raid sirens.

Kremenchuk, an industrial city of 217,000 before Russia’s Feb. 24 invasion of Ukraine, lies on the Dnipro River in the region of Poltava and is the site of Ukraine’s biggest oil refinery.

Russia’s deputy ambassador to the United Nations, Dmitry Polyanskiy, wrote on Twitter, without citing evidence, that the attack was a “Ukrainian provocation.”

“Exactly what Kiev regime needs to keep focus of attention on Ukraine before (the) NATO Summit,” he said, referring to the alliance’s Madrid gathering due to begin on Tuesday.

NATO Secretary-General Jens Stoltenberg said on Monday that the upcoming summit will agree a new assistance package for Ukraine in areas “like secure communications, anti-drone systems, and fuel.”

“We need more weapons to protect our people, we need missile defenses,” Andriy Yermak, head of the president’s office, wrote on Twitter after the attack.

Russia, which has captured the eastern Ukrainian city of Sievierodonetsk after a weeks-long assault, has stepped up missile strikes across Ukraine in recent days.

Missiles hit an apartment block and landed close to a kindergarten in the Ukrainian capital on Sunday, killing one person and wounding several more people.