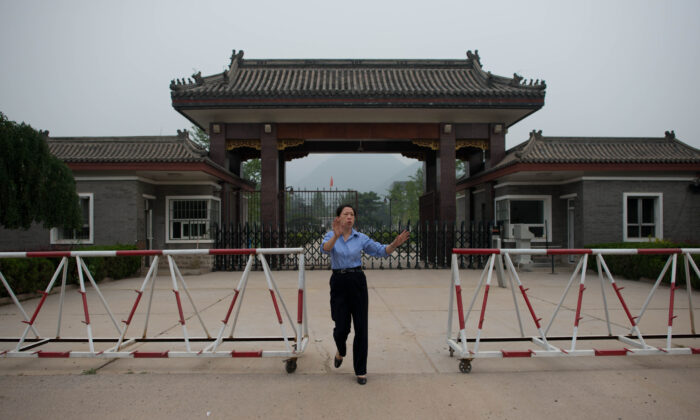 A policewoman approaches to stop the taking of photos at the entrance to Qincheng prison on the outskirts of Beijing on Sept. 12, 2013. (Ed Jones/AFP via Getty Images)
China Human Rights

Frank Yue
Frank Yue is a Canada-based journalist for The Epoch Times who covers China-related news. He also holds an M.A. in English language and literature from Tianjin Foreign Studies University, China.
View profile
Follow
biggersmaller
Print
The Chinese Communist Party (CCP) sentenced at least 100 Falun Gong adherents to prison in September, according to Minghui.org, a U.S.-based website that documents the Chinese regime’s persecution of the spiritual practice.

An Oct. 5 article on the site listed 101 individuals who were given prison terms for their belief in Falun Gong last month, including 25 people of age 65 or older. At the same time, the CCP courts fined them a combined amount of $77,600, and local police officers extorted $7,767 from them.

Falun Gong, also known as Falun Dafa, is an ancient Chinese spiritual practice consisting of slow-moving exercises and moral teachings that promote truthfulness, compassion, and tolerance in everyday life. Its popularity peaked in the late 1990s in China, with 70 million to 100 million adherents, according to official estimates.

The September persecution involved 19 provinces, ethnic minority regions, and municipalities under the direct administration of the central CCP.

In early September, the authorities of Ninghe District in the municipality of Tianjin sentenced a family of three Falun Gong practitioners to jail, according to the report. The father, Li Guoqing; the mother, Yu Bo; and their daughter, Li Lei, were handed prison terms of 12 years, 10 years, and 7 years, respectively, for practicing their faith.

Li Guoqing was a chief power dispatcher at a local energy firm, whose expertise and good character earned him wide recognition and respect from his colleagues. His wife and daughter ran a small family business—a wedding company, which enjoyed a good reputation in the locality.

Soon after their arrests on May 15, 2019, police searched their home and seized three vehicles, a printer, and other private items.

Falun Gong practitioner and lawyer Meng Kai was sentenced to three and half years in prison by a court in Liuyang, Hunan Province, on Sept. 17. The trial came 11 months after his arrest on Oct. 28, 2020, according to the report.

The local government didn’t give Meng’s family any information until the day before his court appearance on Sept. 17. During the trial, the family watched Meng defend himself via a screen, as he pointed out that the court misapplied Article 300 of China’s criminal law to charge him. However, the judge insisted on convicting him despite the allegation.

Meng has served seven years in Chishan Prison in Yuanjiang, Hunan Province, since 2001 for refusing to renounce his beliefs. He was subjected to various forms of torture while imprisoned.

Falun Gong practitioner Yang Manye was given a two-year prison term and fined $1,240 on Sept. 24 in Shanghai.

The 54-year-old engineer, who is a resident of the Putuo District in Shanghai, has repeatedly suffered from persecution in detention centers, brainwashing sessions, labor camps, and prisons for her belief in Falun Gong, according to Minghui.org.

Her combined loss of personal liberty adds up to 10 years, the report states.

Retired teacher Ma Junting, 81, is a resident of Tai’an, Shandong Province. She received a two-year sentence on Sept. 2 on the basis of a pending three-year term she received in 2019.

Police have harassed her more than once and have forcibly sent her to brainwashing sessions.

On June 7, 2018, four police officers from Feicheng Public Security Bureau in Tai’an raided her home and confiscated all of her Falun Gong books and materials. Police forced her family to sign a notice of “bail pending trial” on her behalf.

On Nov. 9, 2020, Ma was out sharing Falun Gong-related calendars and pamphlets with the public. When the police received a report of her actions, her home was raided by officers from Taishan District and agents of the local 610 Office.

The 610 Office was a secret, extra-legal nationwide network designed to target Falun Gong practitioners. Also known as the “Gestapo” of China, the agency had the authority to employ the country’s vast resources in the public security, procuratorate, justice, and propaganda sectors to oppress millions of Falun Gong believers.