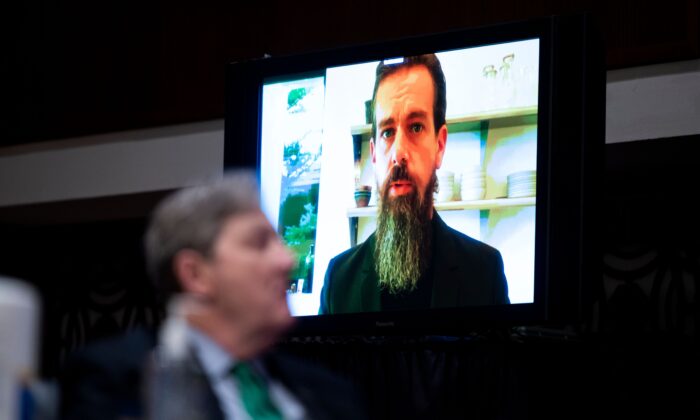 Lawmakers questioned the chief executives of Twitter and Facebook at a Senate Judiciary Committee hearing over the social media platforms’ content moderation practices, with Republicans accusing the companies of censoring President Donald Trump’s posts about the U.S. election, as well as those of other conservatives.

While Democrats on the committee critiqued the Nov. 17 hearing as what Sen. Richard Blumenthal (D-Conn.) called a “political sideshow,” lawmakers on both sides of the aisle were mostly in agreement that Section 230 should be reformed, or potentially fully repealed.

Blumenthal said that “a series of hearings on Big Tech is long overdue on antitrust issues, on privacy concerns and Section 230.” He also said he intends to bring “aggressive and targeted reform to Section 230.”

The hearing, titled “Breaking the News: Censorship, Suppression, and the 2020 Election,” comes after Republican lawmakers voted unanimously to subpoena the two CEOs if they didn’t voluntarily testify following the suppression of a New York Post report, a move that was widely criticized.

“What I want to try to find out is if you’re not a newspaper at Twitter or Facebook, then why do you have editorial control over the New York Post?” said Sen. Lindsey Graham (R-S.C.), the chairman of the committee, in his opening remarks.

Graham said it was his hope that Section 230 be reformed.

“When you have companies that have the power of government, have far more power than traditional media outlets, something has to give,” he added.

Twitter CEO Jack Dorsey and Facebook CEO Mark Zuckerberg defended their companies’ policies in their opening statements, while both acknowledged that more transparency is needed.

“I believe we would benefit from clearer guidance from elected officials,” Zuckerberg said.

Dorsey, in his written testimony, warned against completely repealing Section 230.

He argued that it would have the opposite effect, “likely resulting in increased removal of speech, the proliferation of frivolous lawsuits, and severe limitations on our collective ability to address harmful content and protect people online.”

Democrats were largely concerned about how to stop the spread of misinformation on social media. Between Oct. 27 and Nov. 11, Dorsey testified that Twitter flagged some 300,000 tweets for disputed or potentially misleading content.

Twitter also has repeatedly placed warning labels on Trump’s posts alleging voter fraud or on tweets in which the president said he won the election.

Throughout the hearing, Republicans argued that the companies took a partisan approach to their moderation. As an example of this, Sen. Mike Lee (R-Utah) mentioned how Customs and Border Protection Commissioner Mark Morgan was temporarily suspended from Twitter over a post about the border wall’s effectiveness.

Dorsey conceded that it was wrong to suspend Morgan’s account.

“There was a mistake and it was due to the fact that we had heightened awareness around government accounts during this time.”

Lee had said early in the hearing, “What we’re going to see today is that mistakes happen a whole lot more, almost entirely, on one side of the political aisle, rather than the other.”

Lee, who requested the companies provide him a list of every account that has been deplatformed or censored, noted that the “consistent theme happens to be Republicans, conservatives, and pro-life activists” are the ones who have been targeted.

Sen. Josh Hawley (R-Mo.) said he was recently contacted by a Facebook whistleblower about an internal project management system called “Tasks” at Facebook. Hawley questioned Zuckerberg if his company coordinated with Google and Twitter on content moderation. Zuckerberg denied that they have.