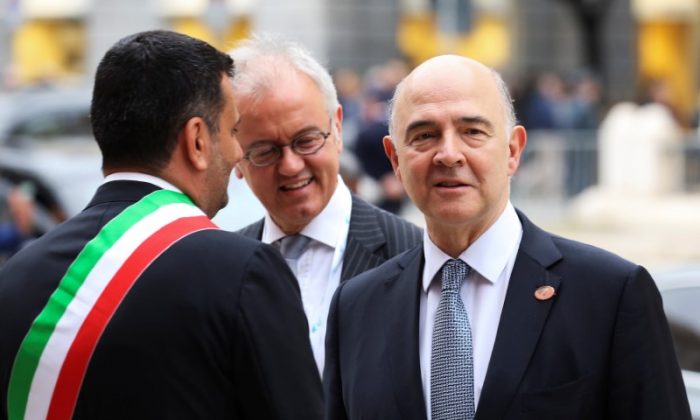 European Commissioner Pierre Moscovici (R) arrives at the Petruzzelli Theatre during a G7 for Financial ministers in the southern Italian city of Bari on Italy May 11, 2017. (REUTERS/Alessandro Bianchi)
International

BARI, Italy — Finance chiefs from some of the world’s richest nations began a two-day meeting in Italy on Friday, with Europe, Japan and Canada hoping to come away with a clearer picture of U.S. President Donald Trump’s plans on important policies.

Inequality, international tax rules, cyber security and blocking the funding of terrorism are the focus of the official agenda for Group of Seven finance ministers and central bankers who are meeting in the Adriatic port city.

However, Trump has threatened to upset the consensus of recent decades on issues such as protectionism and climate change, and his new administration was the focus for ministers entering the 12th century Norman castle for the meeting.

“We need a strong United States to lead the global economy and global politics in a sustainable way,” said German Finance Minister Wolfgang Schaeuble when asked what his message would be to U.S. Treasury Secretary Steven Mnuchin.

Italian Economy Minister Pier Carlo Padoan, the G7 host, said Trump’s plan to slash taxes on businesses was “ambitious” and he was keen to hear more about it from Mnuchin.

At a meeting of the larger Group of 20 finance ministers in Germany in March, ministers dropped their traditional pledge to keep global free trade open, bowing to an increasingly protectionist United States.

Mnuchin, who skipped the opening session in Bari where academics spoke on inequality and growth, arrived long after other ministers and told reporters he was “excited” about the emerging new U.S. trade policy.

“I think you probably saw last night we made an announcement of a 100-day economic plan with the Chinese, so I think we are very happy with how we are proceeding on trade,” he said.

Reflecting tensions over Trump’s attitude to protectionism, there will be no formal discussion of trade in Bari, Italian Treasury officials said. But a U.S. Treasury spokesman said the issue was likely to come up in bilateral talks.

European Economic Affairs Commissioner Pierre Moscovici told reporters he hoped U.S. policy would not abandon multilateralism and free trade. “We can discuss, we can have different appreciations, but we are in the same world and in the same boat,” he said.

The closing statement from Bari will reiterate a warning against competitive devaluations, Italian officials said, as March’s G20 did, allaying fears that the new U.S. administration might weaken the G20’s united front on global currency policy.