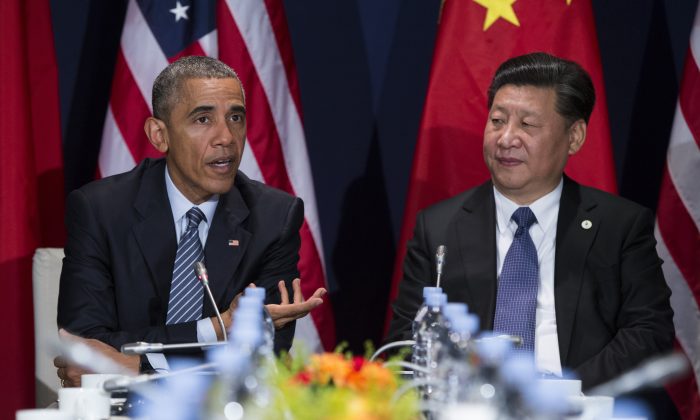 If Obama leads the G-20 leaders in raising the issue of Falun Gong, Xi can sooner usher in epochal change in China.
By Larry Ong

Several hot-button issues will no doubt be on the agenda when President Barack Obama meets with Chinese regime leader Xi Jinping at the G-20: cybercrime, conflict over the South China Sea, and economic blackmail over American missiles in South Korea.

Obama, however, can have the greatest impact—and help seal his legacy in the Oval Office—by leading other world leaders in raising a long-standing human rights issue.

Chinese politics has revolved around Falun Gong since former Chinese leader Jiang Zemin vowed to “eradicate” the spiritual practice. If Obama and the G-20 leaders, in the privacy of G-20 discussions, ask Xi to formally end the persecution and prosecute its mastermind, the international backing could give Xi confidence in his moves to take down Jiang, and conclude a state-sanctioned genocide.

On July 20, 1999, Jiang ordered the persecution of Falun Gong. Over 70 million practitioners in mainland China of all ages and walks of life found themselves liable to be hauled away for performing gentle exercises and believing in truthfulness, compassion, and tolerance.

In the last 17 years, practitioners in China have been rounded up and thrown into prisons, labor camps, and brainwashing facilities. These detention facilities have held hundreds of thousands of practitioners at any one point, and thousands have died from abuse and torture inside, according to incomplete figures from Minghui.org, a clearinghouse for firsthand information about the persecution.

In 2006, independent investigators verified allegations that the Chinese regime was engaged in harvesting the organs of Falun Gong practitioners for profit, killing them in the process. In a 680-page update to their original report, the investigators estimate that the regime had in the the years 2000-2015 performed 60,000 to 100,000 transplants each year, mainly using organs from prisoners of conscience, the majority of whom are practitioners of Falun Gong.

This June, the U.S. House of Representatives unanimously condemned the regime’s live organ harvesting of prisoners of conscience, the bulk of whom practice Falun Gong. The European Parliament had earlier issued a similar resolution, and recently called on the European Union to take action against the regime in a new declaration. Obama hasn’t yet made an official statement on organ harvesting or the persecution of Falun Gong.

Jiang Zemin knew that he had sanctioned crimes against humanity and wanted to avoid ever being held accountable.

So Jiang stacked the regime’s top decision-making body and important military positions with his allies before handing over the reins to Hu Jintao. Virtually all of Jiang’s made men secured their promotion by playing an active role in the persecution of Falun Gong. With a collection of bloody hands running the regime, Jiang the Party godfather felt safe—until an accident of history scuttled his plan to escape responsibility for Falun Gong.

In the lead-up to 2012, Jiang’s preferred candidates to succeed Hu as Party leader were ruled out due to political scandals or age. Jiang basically had two options. With Hu’s protégé Li Keqiang emerging as a favorite to take the top job, Jiang picked the seemingly less threatening and less ambitious Xi Jinping as a compromise candidate.

But Xi was never Jiang’s ideal choice because he didn’t have a vested interest in the persecution of Falun Gong. (Xi is not listed as an oppressor by nonprofit organizations that closely monitor the persecution.) Also, Xi owed his ascent up the political rungs to his pedigree as a red aristocrat (his father, Xi Zhongxun, was a founding revolutionary) and wasn’t a Jiang loyalist.

Xi was a loose end that Jiang needed to snip before his tightly woven tapestry unraveled.

Two of Jiang’s lieutenants, the wily Politburo member Bo Xilai and the former security czar Zhou Yongkang, planned to displace Xi after he took office in 2012. Xi indirectly alluded to this coup plot in a speech when he accused Bo, Zhou, and other purged cadres of conspiring to “wreck and split” the Party.

The failed coup initiated what some China analysts are calling a political deathmatch between Xi Jinping and Jiang Zemin.

In 2013, Xi began cleansing the Party of Jiang’s influence through a sweeping anti-corruption campaign. Elite cadres and die-hard Jiang supporters, like military vice chair Guo Boxiong and Zhou Yongkang the security czar, were investigated, arrested, and sentenced to life in prison. Most observers of Chinese politics earlier believed that Guo and Zhou were untouchable.

To wrestle control of the regime from Jiang and consolidate his position, Xi enacted a comprehensive military reform, and governed through so-called “leading small groups.”

Leading small groups are secretive and powerful policy-making panels that bypass the Standing Committee of the Politburo—the top decision-making body that Xi has limited influence over, given its current membership.

But power consolidation looks remarkably like the beginnings of a personalized dictatorship—an opening that Jiang’s remaining key allies have exploited.

State media quietly censored Xi’s promotion of constitutionalism, a key part of his “China Dream” political manifesto. This year, the Liu-led propaganda machinery linked Xi with Maoist imagery and Mao-era revolutionary songs during a televised gala and a concert held in an important ceremonial and legislative hall, leading international media to condemn Xi for building a cult of personality.

When Xi moved against the propaganda apparatus—he publicly toured the state media headquarters and instructed the Party mouthpieces to adhere to his leadership—it solidified his image as an all-controlling, oppressive dictator.

The reign of Xi has thus far been cast as grim and illiberal—critics say that a mass crackdown on human rights lawyers and their families, the vanishing of booksellers in semiautonomous Hong Kong, and a host of public self-confessions, echo the Maoist era.

But it is unclear if Xi is to be wholly blamed for the rights violations under his leadership. Televised confessions are within the purview of propaganda chief Liu, while analysts refer to the security apparatus responsible for recent suppression as “Zhou Yongkang’s security system without Zhou Yongkang in it.”

Meanwhile, Xi has made some moves that seem at odds with dictatorial ambition.

After around one year in office, Xi abolished the regime’s brutal labor camp system. He has also placed emphasis on the rule of law and constitutionalism. Due to the interference of Jiang and his faction, however, Xi’s reform-minded moves have been either muted or rendered virtually ineffectual.

This year, the Xi leadership made gestures near key dates of the persecution of Falun Gong that suggest that the regime might be shifting its stance on the practice. Xi has also introduced a new Party regulation that appears ready-made to take down Jiang—it holds officials responsible for the crimes committed by their subordinates.

Jiang ruled by establishing a vast network of connections throughout China, buying loyalty with corruption. So long as Jiang is alive and free, he, and his faction, will continue opposing Xi. Toppling Jiang will send a message to all the members of this system that his way is over.

Only then will Xi have a free hand to chart a new course for China.

If Xi is serious about the rule of law and constitutionalism, his first step will be ending the persecution of Falun Gong, which for 17 years has been inflicted outside the law on 70 million or more Chinese people.

Ending that persecution will also end the most egregious violation of the nation’s laws—the state-sanctioned harvesting of organs from Falun Gong practitioners and other prisoners of conscience.

If Xi makes such changes, then he will have the opportunity to begin real economic reform.

Obama and other leaders of the G-20 should realize it is in their own self-interest to support such changes. A constitutional, legitimate Chinese government will have far less need for military adventures and be more likely to accept international norms, while abiding by the rule of law at home.