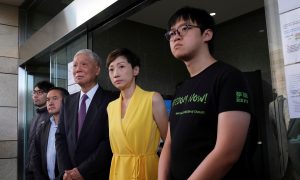 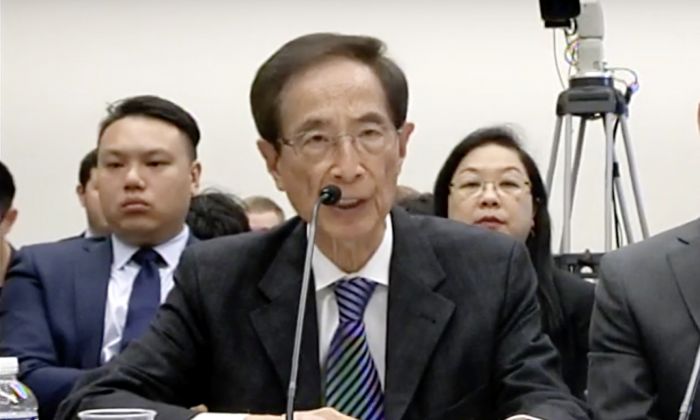 Martin Lee speaks during the U.S. Congressional-Executive Commission on China hearing in Washington on May 15, 2019.(Screenshot/YouTube)
China Human Rights

Hong Kong pro-democracy activists urged U.S. officials during a congressional hearing on May 15 to help fight an extradition bill that would allow criminal suspects to be sent to mainland China.

During the hearing held by the U.S. Congressional-Executive Commission on China (CECC), the Hongkongers expressed their concern about the Hong Kong government’s plans to amend its extradition laws in as soon as two weeks, amid the city’s diminishing autonomy since it was returned to Chinese sovereignty in 1997.

Because the majority of Hong Kong’s unicameral legislature, the Legislative Council (LegCo), is pro-Beijing, the amendments are expected to be approved.

U.S. Congress members and the witnesses discussed how the proposed extradition bill may hurt not only Hong Kong’s free speech, rule of law, and democracy, but also Hong Kong’s economy and every aspect of society.

Because the Chinese regime goes by “rule by law,” not “rule of law,” anyone who angers Beijing could be at risk of criminal prosecution, said Martin Lee, Hong Kong pro-democracy activist and former lawmaker. That includes 85,000 American expats currently living in Hong Kong.

U.S. Rep. James P. McGovern (D-Mass.), the CECC chairman, concluded: “Today’s testimonies are incredibly powerful. I think you have made clearly the urgency of the situation.”

Also, Law was disqualified from his elected seat in the LegCo in 2017, which would have made him the youngest lawmaker in Hong Kong’s history.

He was disqualified over the manner in which he took his oath to public office, a ruling made possible after the Chinese regime intervened in issuing a new interpretation of the city’s constitution. Several other pro-democracy lawmakers were also disqualified under similar circumstances.

Law said: “I, myself, am the felicitous example [of human rights encroachment].”

Mak Yin Ting, a journalist and former chair of the Hong Kong Journalists Association, remarked on the declining press freedoms in the city, noting that Hong Kong’s ranking on Reporters Without Borders’ Press Freedom Index in 1997 was around 20th, but this year, the city slipped to 73rd.

U.S. Sen. Marco Rubio (R-Fla.) asked whether Hong Kong reporters are afraid of the Chinese regime, to which Mak responded: “In the survey we conducted earlier this year, 22 percent of [Hong Kong] journalists are under pressure from supervisors when they’re reporting on the Hong Kong independence issue” to not cover such topics. In recent years, some voices in Hong Kong have called for formal independence from mainland China: a taboo topic for Beijing.

Mak added that many Hong Kong media self-censor, in fear of repercussions if they criticize Beijing. She feared the situation would get worse if the extradition bill is passed—as journalists and editors will be even more scared to anger the Beijing government.

Regarding the new extradition measures, U.S. Rep. Thomas Suozzi (D-N.Y.) asked the witnesses how they thought the U.S. government could help.

The witnesses said they hoped the Congress could send a working team to Hong Kong as soon as possible to talk to the current pro-Beijing chief executive, Carrie Lam.

U.S. Rep. Chris Smith (R-N.J.) remarked on the importance of U.S. support for such efforts: “It’s in everybody’s interests that Hong Kong remains a free and prosperous bridge between China and West … If the United States and the international community does not defend the rights and freedoms of Hong Kong citizens now, there’s little hope that freedom can take a root in mainland China in the future.”

McGovern added: “We are on the side of the people of Hong Kong. We are on your side. We are certainly taking your suggestion seriously and will do the necessary follow-up.”