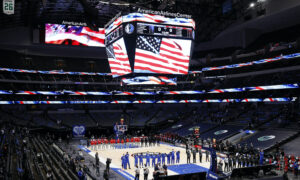 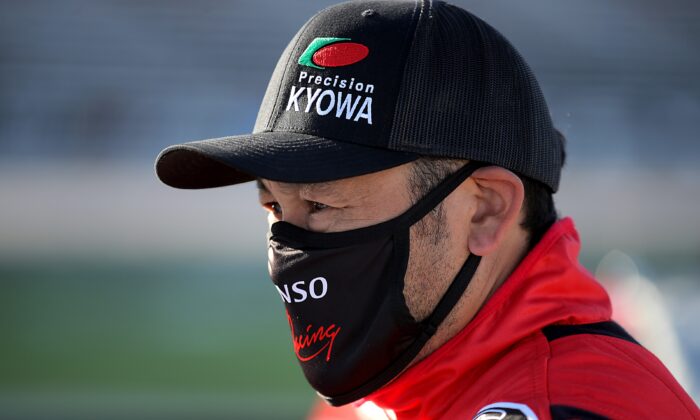 Akinori Ogata, driver of the #33 Toyota, stands on the grid prior to the NASCAR Gander RV & Outdoors Truck Series Vankor 350 at Texas Motor Speedway, in Fort Worth, Texas, on July 18, 2020. (Chris Graythen/Getty Images)
Motorsports

At 47, Ogata Won’t Give Up on Being First Japanese-Born Driver To Break a NASCAR Barrier

By Alex Andrejev
From The Charlotte Observer

MOORESVILLE, N.C.—Akinori Ogata doesn’t always understand his spotter, which at times makes driving his truck at 180 miles per hour difficult. Quick communication on the team radio is essential to competitive racing.

Still, Ogata is usually able to make it through a race unscathed as spotter Randy Bradshaw feeds him quick lines and Ogata reports basic calls like “tight” and “loose” back to the Reaume Brothers Racing crew.

Besides, Ogata said, even if he and Bradshaw spoke the same language perfectly, he doesn’t know all the NASCAR terminology in Japanese like he does in English, so he just figures it out during races.

“I never use Japanese language about racing,” Ogata told The Charlotte Observer. “So it’s not familiar. For example, ‘Inside lane, outside lane.’ ”

Slower conversations in English have been part of the norm for Ogata, 47, since he moved to North Carolina 23 years ago from Kanagawa, Japan, to pursue his racing career. He speaks Japanese at home with his wife and two sons, who split time between Japan and the United States, as well as in certain meetings since most of his race sponsors are Japanese-based companies.

But Ogata uses English in most other situations and said he tries to assimilate to American customs, such as eating at barbecue restaurants with team members or friends in the NASCAR industry, although he prefers sushi.

“I tried to hide my Japanese, [being] Asian,” Ogata said. “But I cannot hide it.”

It’s a wonder to many in Ogata’s network why he uprooted his life in 1998 to move to North Carolina with hardly any connections or money to pursue stock car racing. He said his friends in Japan questioned him, but Ogata was enamored with the sport after attending the 1996 Daytona 500, a race in which Dale Earnhardt started on the pole and Dale Jarrett won. That sold him on the atmosphere at American tracks.

“I thought, ‘Wow, it’s so exciting,'” Ogata said. “There are so many people. The speeds and sounds.”

He had driven in professional motocross events as a teenager and discovered NASCAR at age 18 by flipping through television channels at a hospital in Kanagawa while recovering from a broken leg. Then came the visit to Daytona. Two years later, he acquired his visa and moved to the United States to fall in love with short track and late model racing by watching events at now-defunct Concord Speedway. He still works on one of his own late-model cars in his garage in Mooresville.

But with limited funding over the last decade, Ogata has only been able to compete in a handful of races in the lower-level K&N Pro Series, Truck Series, and a single Xfinity race in 2018. His best Truck Series finish was 18th place in 2015.

Years later, Ogata is not letting go of his dream to one day make it to NASCAR’s biggest stage, the Daytona 500, and he’s taking small steps to get there.

Ogata is in his second year running a part-time schedule with the smaller Reaume Brothers Racing team and qualified for the Truck Series race at Charlotte Motor Speedway on Friday night. He raced the No. 33 truck sponsored by RV owners organization Good Sam, his first American sponsor, and finished 28th. The deal developed the same way it has for many other underfunded drivers in the series this year; Ogata tweeted at Camping World CEO Marcus Lemonis, and Lemonis set up his Good Sam company for space on Ogata’s truck for a single race.

“Akinori is kind of like a cannon,” said RBR owner Josh Reaume, who also competed against Ogata in the Truck Series. “I think he drives the absolute max of the race car, probably to an end that is not good … but there’s light at the end of that tunnel.”

“I think he has a lot of ability,” Reaume continued. “And I would love it if he could secure the partnerships to where it would make financial sense for us to be able to run full-time.”

A full-time ride is one of Ogata’s many goals, with his ultimate dream being to become the first Japanese-born driver at the Daytona 500, almost 20 years after Hideo Fukuyama became the first Japanese driver to compete in a NASCAR Cup race in 2002. Ogata was able to get a taste of the atmosphere he first fell in love with at Charlotte with the track reopened to fans at full capacity for the state’s largest weekend in motorsports.

“It’s a good feeling,” Ogata said before qualifying about the opportunity, a giant smile on his face. “It’s exciting.”

He also narrowly improved on earlier finishing positions. He raced at Atlanta in March (finished 37th) and earlier this month at Darlington, where he placed 34th after crashing out while driving a throwback scheme honoring NASCAR’s first Japanese driver Kenji Momota with sponsorship from KYOWA, a Japanese molding company.

Rolfe Schnur, president of Rolfe Schnur Motorsports Marketing, has been working with Ogata over the last few months to put sponsorship deals together. Schnur’s previous clients included Cup driver William Byron as well as Momota, and Schnur said he had been keeping tabs on Ogata’s journey for years, but only recently connected with him.

“His American dream is to race in NASCAR at the highest level, but there’s no one writing checks,” Schnur said. “It’s just him persevering.”

Unlike Momota, who was a racing journalist and made one start in the NASCAR Truck Series in 1995, or current Cup driver Kyle Larson, who was born in California to a Japanese-American mother, Ogata has a relatively limited grasp of the language and arrived in the United States with no contacts or funding.

Schnur described him as a modern-day Carl Edwards, a self-starter who hands his business cards to anyone he meets.

Reaume agreed, “That’s a good way to put it.”

While Ogata said he remains determined to make it to the Cup Series, he recognizes his greater influence in the sport might come at the grassroots level. Already in his late 30s when he first entered NASCAR in K&N, Ogata said he was considered too old for NASCAR’s Drive for Diversity pipeline that has helped elevate the careers of international-born drivers, such as Daniel Suárez, who is helping build the sport’s Hispanic fanbase as a native of Mexico.

Instead, Ogata sees an opportunity to start his own racing program or pipeline for Japanese-born drivers.

“Twenty years ago, people around here had never seen Asian people,” Ogata said. “So it was hard when I started.”

Reaume recalled earlier years when the language barrier was even more challenging for Ogata and said he thinks establishing a program would be beneficial to the sport and aspiring talent.

“It’s a tough sport to break into,” Reaume said. “Akinori has done a lot of the legwork, so definitely a lot of drivers could piggyback on the success he’s had.”

Ogata said he often faces discrimination in daily life, but he does not focus on it, preferring to concentrate on his work and his mission.

“If I think about that every time, I get tired,” Ogata said. “But I still love people in North Carolina and I love racing.”

“If I retire from racing, I want to stay here and take care of younger drivers.”