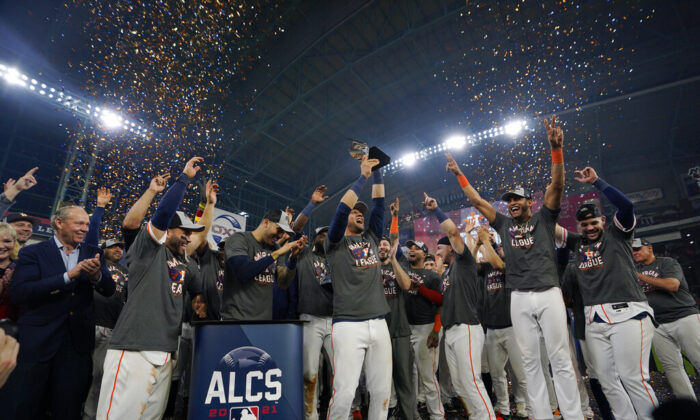 Astros Return to World Series, Shutting Out the Red Sox

The Houston Astros fell behind 2–1 after the first three games of the American League Championship Series (ALCS) against the Boston Red Sox. They found great defense, pitching, and hot bats to win three games straight to advance to the World Series.

Astros rookie pitcher Luis Garcia was superb as he brought a no-hitter into the sixth inning. He was finally relieved after two outs in the sixth, after giving up a triple to Enrique Hernandez.

Astros’ other young star, designated hitter Yordan Alvarez, won the MVP for the ALCS and was 4–4 hitting for the game. In the bottom of the first inning, his double drove in Alex Bregman for the only run they would need. Alvarez also hit a triple in the sixth inning and scored their second run from a Kyle Tucker RBI. Tucker’s home run in the eighth inning, drove in Alvarez and Carlos Correa to result in a final score of 5–0.

The Astros have now advanced to the World Series three times in the last five years. They won the championship in 2017 against the Dodgers, and lost to the Washington Nationals in 2019.

Ironically, they were led by Boston’s current manager Alex Cora. Cora was released by the Astros after a scandal that revealed the organization was involved in intricate sign-stealing of their opponents using technology.

The Astros then signed veteran skipper Dusty Baker in 2020 and made the playoffs. Baker became the first MLB manager to lead five different teams to the playoffs. He returns to the World Series as manager for the second time. The first was with the Giants in 2002. He also played in three championships with the Dodgers, winning the World Series in 1981.

Third baseman Alex Bregman stated postgame to TBS, “Dusty loves the game. Dusty loves this team; and ever since he’s been here, I mean it’s been a blast playing for him. He’s so smart. He knows so much about the game, and being able to pick his brain on a daily basis is really special.”

Baker added regarding the season’s success, “Well, it ranks at the top for now. At 72 (years old), I gotta tell you, (it’s) only a number. Everybody wants to say that you can’t do this at this age and that age.  If you take care of yourself, and you believe; and you kind of stay in tune to what’s up today. You know you can do it. The best thing for me is, I have a young daughter, 42, and have a young son, 22; they tell me my pant’s too tight, keep me up on to music, so that way I can identify with my guys.”

The Astros await the winner of the NLCS between the Dodgers and the Braves; game 6 is Saturday, Oct. 23 at 2:08 PM ET.