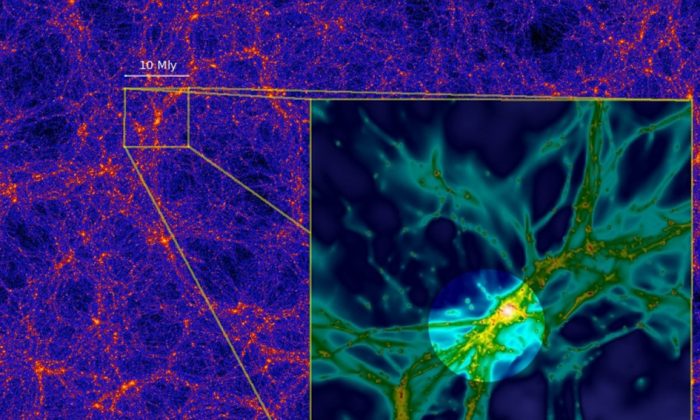 A stunning light shone from a quasar like a galactic flashlight, illuminating a wondrous sight never before observed—the filaments that bind galaxies forming a cosmic web.

It opens up new insights into the structure of the universe.

Scientists already knew that galaxies are embedded in a cosmic web, and computer simulations had been made to try to predict what that web looks like, but this is the first time the filaments have ever actually been seen.

Hydrogen gas in the filaments was illuminated in a fluorescent glow by the radiation from a quasar.

“This quasar is illuminating diffuse gas on scales well beyond any we’ve seen before, giving us the first picture of extended gas between galaxies,” said J. Xavier Prochaska, coauthor of the University of California–Santa Cruz study, which was published in the journal Nature on Jan. 19. Prochaska was quoted in a Keck Observatory press release. “It provides a terrific insight into the overall structure of our universe.”

Sebastiano Cantalupo, first author of the paper, said: “The light from the quasar is like a flashlight beam, and in this case we were lucky that the flashlight is pointing toward the nebula and making the gas glow.”

So how does the real thing compare to the computer simulations? The filament contains as much as 10 times the amount of gas expected. It contains gas with a weight equivalent to a thousand billion suns.

Cantalupo said: “These observations are challenging our understanding of intergalactic gas and giving us a new laboratory to test and refine our models.”