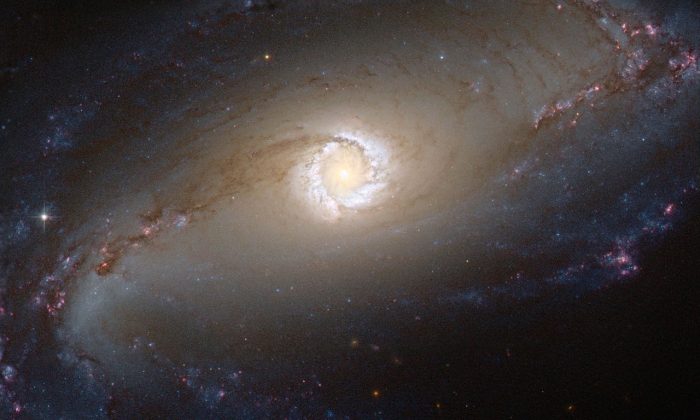 A bright star-forming ring that surrounds the heart of barred spiral galaxy NGC 1097 in this file photo. (NASA)
Beyond Science

Astronomers Adam Frank and Woodruff Sullivan, at the University of Rochester and the University of Washington respectively, published a paper in the May issue of the journal Astrobiology exploring what they call the “cosmic archaeological question:” “How often in the history of the universe has evolution ever led to a technological species, whether short- or long-lived?”

Frank summed up their conclusion in an op-ed for the New York Times, published June 10: “While we do not know if any advanced extraterrestrial civilizations currently exist in our galaxy, we now have enough information to conclude that they almost certainly existed at some point in cosmic history.”

We now have enough information to conclude that they almost certainly existed at some point in cosmic history.
— Adam Frank, astronomer, University of Rochester

The astronomers came to this conclusion by reworking the famous Drake equation from a different perspective, also adding up-to-date information. The equation was originally formulated by astronomer Frank Drake in 1961 to calculate the odds of contact with alien life.

Drake studied radio astronomy at Harvard and held various posts in the field, including at NASA’s Jet Propulsion Laboratory. He included in his equation various factors, such as the rate of formation of stars suitable for the development of intelligent life and the number of planets in each solar system with an environment suitable for life. (See the image below if you want to see Drake’s entire equation).

Improvements in astronomical observation technology have greatly boosted our knowledge of exoplanets. In April, the Kepler spacecraft team announced the discovery of 1,284 planets outside our solar system.

Frank wrote in his op-ed: “Three of the seven terms in Drake’s equation are now known. We know the number of stars born each year. We know that the percentage of stars hosting planets is about 100. And we also know that about 20 percent to 25 percent of those planets are in the right place for life to form. This puts us in a position, for the first time, to say something definitive about extraterrestrial civilizations.”

By looking at the probability of an alien civilization having ever existed, instead of currently existing, Frank and Sullivan also bypassed the time constraints built into Drake’s factors.

“This left us with only three unknown factors, which we combined into one ‘biotechnical’ probability: the likelihood of the creation of life, intelligent life, and technological capacity,” Frank wrote. He concluded: “The odds that we are not the first technological civilization are actually high. Specifically, unless the probability for evolving a civilization on a habitable-zone planet is less than one in 10 billion trillion, then we are not the first.”

In 2013, mathematicians at the University of Edinburgh made a similar statement about the probability of alien cultures having sent probes to Earth.

Arwen Nicholson and Duncan Forgana considered factors such as the velocity probes could gain by extracting energy from a star’s motion and how self-replication technology could affect exploration timescales.

In the abstract of their study, published in the International Journal of Astrobiology, they wrote: “We conclude that a fleet of self-replicating probes can indeed explore the galaxy in a sufficiently short time to warrant the existence of the Fermi Paradox.”

The Fermi Paradox is named for physicist Enrico Fermi and it refers to the high probability of alien civilizations existing, yet the apparent lack of evidence of their existence. So when Nicholson and Forgana say their calculations, “warrant the existence of the Fermi Paradox,” they mean that they have confirmed the very high probability that alien civilizations have existed.

They were inspired by the progress of NASA’s Voyager 1 probe, which is set to rendezvous with a star named AC+79 3888 40,000 years from now. They wondered if an alien civilization might have sent us a probe some 40,000 years ago through similar methods, set to reach us any day now.