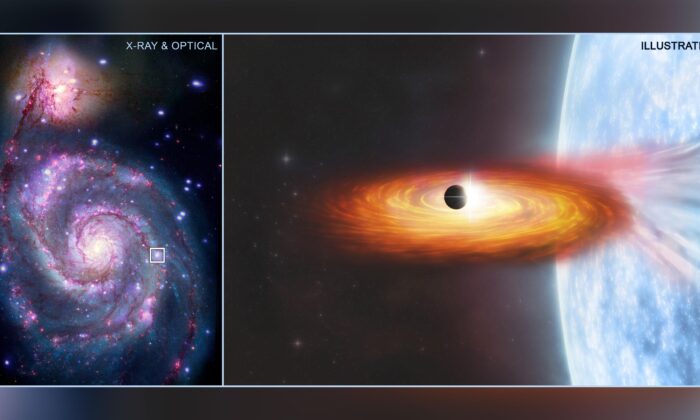 Astronomers Detect First Possible Planet Outside of Our Galaxy

NASA has announced the possibility of the first confirmed planet located outside of the Milky Way galaxy.

Exoplanets are planets outside of the solar system, but all previously confirmed and possible exoplanets discovered to date were based in the Milky Way and were mostly less than about 3,000 light-years from Earth. The exoplanet in M51 is believed to be approximately 28 million light-years away.

In a study published in Nature Astronomy, astronomers detected the presence of the hitherto unknown exoplanet by its transit, which occurs when the passage of a planet in front of a star obscures some of the star’s light to create a distinctive dip. The possible exoplanet’s transit lasted three hours, but astronomers observed it also has a large orbit and a rapid affirmation of its planetary status is unlikely.

“Unfortunately to confirm that we’re seeing a planet we would likely have to wait decades to see another transit,” said Nia Imara, an astrophysicist at the University of California at Santa Cruz and co-author of the Nature Astronomy study. “And because of the uncertainties about how long it takes to orbit, we wouldn’t know exactly when to look.”

The astronomers located the potential exoplanet following searches of three galaxies beyond the Milky Way galaxy using both Chandra and the European Space Agency’s XMM-Newton space-based telescope. The search covered 55 systems in M51, 64 systems in Messier 101 (the “Pinwheel” galaxy) and 119 systems in Messier 104 (the “Sombrero” galaxy), but only the single exoplanet candidate was identified.

“We are trying to open up a whole new arena for finding other worlds by searching for planet candidates at X-ray wavelengths, a strategy that makes it possible to discover them in other galaxies,” said Rosanne Di Stefano, an astrophysicist with the Center for Astrophysics at Harvard & Smithsonian in Cambridge, Massachusetts, who led the study.