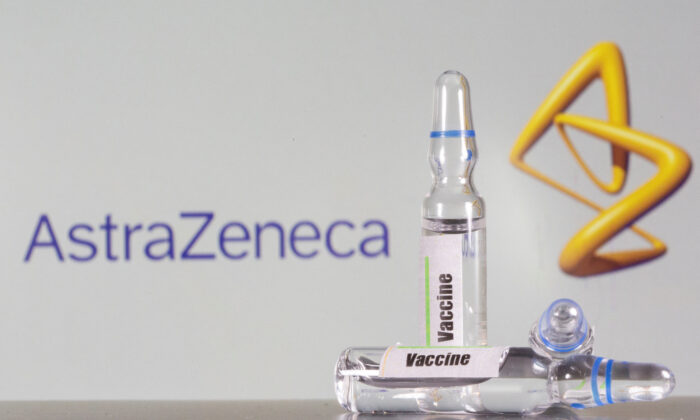 A sample vaccine vial is seen in front of the AstraZeneca logo in an illustration photo taken on Sept. 9, 2020. (Dado Ruvic/Reuters)
Businesses in COVID-19

AstraZeneca said its COVID-19 vaccine, called Vaxzevria, generated an antibody response against Omicron when given as a third booster dose to individuals who were earlier inoculated with either AstraZeneca’s shot or an mRNA jab.

Citing preliminary data from an ongoing clinical trial, AstraZeneca said in a Jan. 13 statement that its COVID-19 vaccine generated an increased immune response against a number of variants, including Delta and the highly mutated Omicron strain.

“These important studies show that a third dose of Vaxzevria after two initial doses of the same vaccine, or after mRNA or inactivated vaccines, strongly boosts immunity against COVID-19,” said Andrew J. Pollard, chief investigator and director of the Oxford Vaccine Group at the University of Oxford, which co-developed Vaxzevria.

AstraZeneca said it plans to submit the data to health regulators around the world for approval for use as a third shot.

“Given the ongoing urgency of the pandemic and Vaxzevria’s increased immune response to the Omicron variant, we will continue to progress regulatory submissions around the world for its use as a third dose booster,” said Mene Pangalos, executive vice president of AstraZeneca’s R&D arm.

Vaxzevria, which was invented by the University of Oxford, is a viral vector vaccine based on a weakened version of a common cold virus. Pfizer and Moderna’s COVID-19 vaccines are based on mRNA technology.

AstraZeneca and its manufacturing partners have supplied over 2.5 billion doses of Vaxzevria across the world, even though it is not approved in the United States. Pfizer and development partner BioNTech have shipped about 2.6 billion doses.

Separately, Oxford University and AstraZeneca last month started work on a vaccine specifically targeting Omicron though AstraZeneca has said it was not yet clear whether such an upgrade was needed.

Pfizer Chief Executive Albert Bourla said a COVID-19 vaccine that specifically targets the Omicron variant would likely be ready in March, noting that the company had already started manufacturing doses.

Bourla said Pfizer is ready to file for U.S. regulatory approval for the redesigned COVID-19 vaccine, noting also that he believes COVID-19 vaccines could eventually become an annual shot for most people, and some high-risk groups might be eligible to receive the shots more often than that.