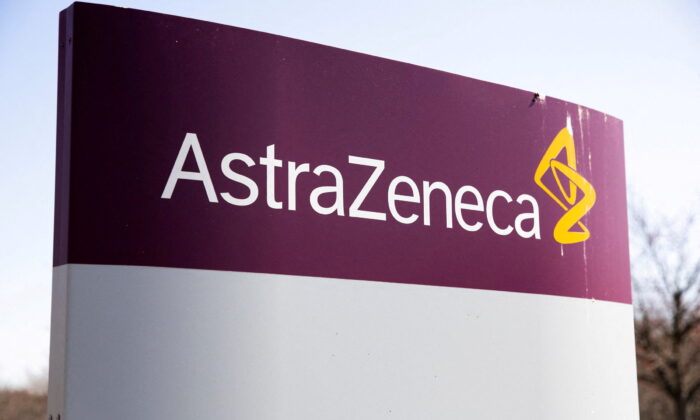 The logo for AstraZeneca outside its North America headquarters in Wilmington, Del., on March 22, 2021. (Rachel Wisniewski/Reuters)
Economic Policies

In a Reuters Newsmaker interview, he said the British drugmaker’s top-selling cancer therapy Tagrisso as well as its potential blockbuster Enhertu would likely be negatively affected by the new law in the coming years.

Last week, a landmark law that included provisions to tackle the rising cost of medicines was passed in the United States, in a rare legislative defeat for the powerful pharmaceutical industry that set a precedent for curbing drug prices in the world’s most lucrative market for medicines.

The act will for the first time allow the federal Medicare health plan for the elderly and disabled to negotiate prices on up to 20 drugs a year. It also sets limits on drug price increases for Medicare and caps out-of-pocket costs for those enrolled in the program.

The price negotiation portion of the legislation, which will kick off from 2026, poses a significant challenge, Soriot said.

He said it was unclear how such negotiations would play out, and that it appeared to be structured as less of a negotiation and more of an “imposition of price.”

With the current system of patent protection, pharmaceutical companies are able to recoup their investment in developing a drug drugs over nine to 11 years, Soriot said.

In many cases, such as AstraZeneca’s cancer drug Enhertu, companies secure regulatory approval to treat patients who have received other therapies first, otherwise known as a later-line indication.

Then, they often seek approval as a first-line indication, which is a much larger pool of patients who haven’t been treated with any therapies before.

The problem is the clock on patent protection that allows drugmakers to charge premium prices starts with the first approval.

With this new legislation, companies will be disincentivised to go after later-line indications so that they maximize the number of patients they can treat for as long as possible to recoup their investment.

“That’s unfortunate because patients will suffer,” Soriot said, adding companies will have no choice because they have to protect their ability to invest in future drugs.

By Aimee Donnellan and Natalie Grover