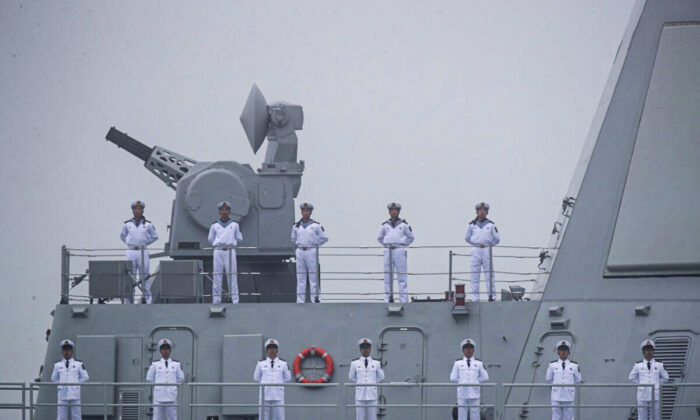 Sailors stand on the deck of the new type 055 guide missile destroyer Nanchang of the Chinese People's Liberation Army Navy (PLAN) as it participates in a naval parade to commemorate the 70th anniversary of the founding of China's PLAN in the sea near Qingdao, in eastern China's Shandong Province on April 23, 2019. (Mark Schiefelbein/AFP via Getty Images)
Thinking About China

The China-watching community has been going through a bit of a freak-out over the U.S. Defense Department’s (DoD) latest report on the Chinese military. In particular, the report—an annual, congressionally mandated publication—states that China now possesses the “largest” navy in the world.

In a nutshell, the DoD report asserts that “The People’s Liberation Army Navy (PLAN) has numerically the largest navy in the world with an overall battle force of approximately 355 ships and submarines, including approximately more than 145 major surface combatants.”

It may seem like the PLAN already has a huge advantage over the USN, and that it will only grow wider over the next decades. Simple numbers, however, still require a lot of unpacking.

Yes, China has more warships than the United States overall, that is undeniable. Moreover, the PLAN has a clear numerical superiority in the Pacific Ocean in several types of platforms. The PLAN possesses 38 modern destroyers, including the new 12,000-ton Type-055 Renhai-class heavy destroyer. In addition, the PLAN operates 50 frigates, 70 corvettes, and 60 modern Houbei-class patrol boats (a stealthy, high-speed catamaran bristling with anti-ship cruise missiles), as well as 50 modern attack submarines.

Numbers can be deceptive, however. As pointed out by several analysts, the PLAN may have more hulls, but USN ships are, on average, much bigger.

The USN overall weighs in at around 4.5 million tons, more than twice the PLAN’s 2 million tons.

The USN also has numerical superiority where it counts. In particular, this means power projection and amphibious assault. The U.S. Pacific Fleet alone operates five nuclear-powered aircraft carriers, each equipped with around 75 combat aircraft. The USN has another five carriers deployed elsewhere around the world.

In addition, the USN assigns four of its nine flat-deck amphibious assault vessels to the Pacific, each capable of acting as a mini-aircraft carrier (flying F-35s off its deck).

In comparison, the PLAN currently operates only two much smaller carriers, each capable of launching at most two dozen fighter jets, and just two (soon to be three) amphibious assault ships.

Large ships and aircraft carriers in particular are essential to creating a blue-water navy. A blue-water navy is defined as a “maritime force capable of sustained operations across the deep waters of open oceans,” according to the Defense Security Service. A “true” blue-water navy can project power far from home, while a smaller blue-water navy is able to dispatch a few vessels for short periods of time.

The PLAN is not yet a true blue-water navy. It has some impressive operational capability in Western Pacific and Indian Ocean, and, for the present, that’s about it.

Finally, no comparison of the PLAN and the USN is complete without also factoring in America’s allies. Japan is increasingly concerned about the growing Chinese military threat, and it is crafting a sizable naval force that it could contribute to any Sino-American competition. These include 22 submarines, four large flat-deck helicopter assault ships—two of which are being converted to fixed-wing aircraft carriers—and 36 destroyers, and it is building 22 modern, multirole frigates.

Taiwan is also a likely partner, and it could offer its four destroyers, 22 frigates, and dozens of fast missile boats. In addition, it is presently constructing 12 Tuo Chiang-class corvettes—stealthy, high-speed vessels that are intended for hit-and-run actions against Chinese aircraft carriers and amphibious assault ships.

Throw in just these ships—and perhaps Australia’s three new destroyers and eight frigates—and USN/allied forces either roughly equal or outnumber the PLAN in terms of large warships and submarines. In addition, USN forces are better-trained, better-led, and more experienced than their Chinese counterparts.

Nevertheless, all this discussion of comparative numbers of warships or total displacement may be irrelevant where it counts most: the South China Sea and the waters around Taiwan. This is where any Sino-American clash is likely to occur and it also where China is likely to prevail, whatever the numbers.

In any fighting taking place close to mainland China, the PLA could have a critical “home field” advantage. In particular, the PLAN operates over 70 Type-056 corvettes and 60 high-speed Houbei-class missile boats, and these ships could dominate the South China Sea and the Taiwan Strait. In addition, PLAN forces would be protected by an extensive integrated air-defense system along the Chinese coast, consisting of radars, land-based aircraft, and surface-to-air missiles.

U.S. forces, meanwhile, would have to sail several days from their ports in Hawaii, Guam, or Japan to reach this region, while U.S. air and naval bases in Japan and Guam would be vulnerable to Chinese missile strikes.

One final point is also worth noting. While U.S. naval forces age overall, due to fewer replacements and subsequently longer service times, the PLAN is relatively young. Almost all of its surface fleet is less than two decades old.

In the end, it may not matter whether the PLAN or the U.S. Navy is the “larger” of the two. Advantage accrues from where and how these forces are used. In the open waters of the Pacific and the Indian Ocean, U.S. forces would probably prevail. On the other hand, the closer conflicts get to the Chinese mainland—particularly in the South China Sea and around Taiwan—the more the PLAN’s numerical superiority in small ships does matter—a lot.