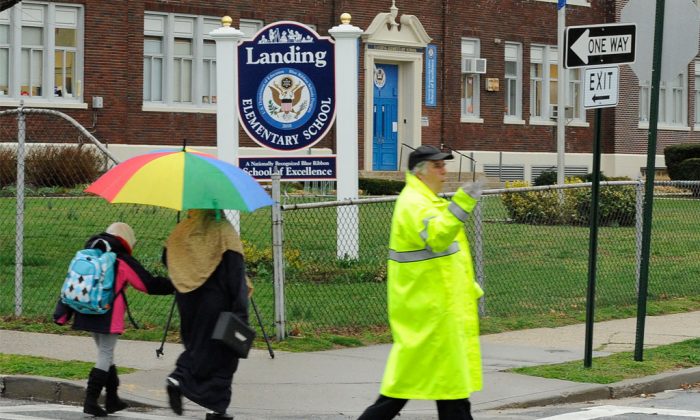 A student and her mother pass a crossing guard as they arrive at Landing Elementary School in Glen Cove, N.Y., Friday, April 12, 2013. A new law is raising the penalty for assaulting crossing guards doing their jobs. (AP Photo/Kathleen Malone-Van Dyke)
New York

In 30 days the law will raise misdemeanor assault to a felony for the housing authority workers. And the law goes into effect on Nov. 1 for crossing guards.

Maximum penalties for felony assaults range from 3–25 years. The most common charge, a second-degree assault, carries a 3–7-year maximum penalty.

Sponsors said assaults aren’t unusual against staff at housing projects. In 2012, Lasheyi Carrington, a caretaker at South Jamaica Houses in Queens, fought off an attempted rape. But the culprit was only charged with criminal mischief.

“He told one of my supervisors that he was coming back. That really doesn’t make me feel better about going there or for any other woman that is on the job,” Carrington told The Chief-Leader, a civil service paper.

Legislators also said there are untold, often unreported incidents where crossing guards are menaced by cars, spit on, and hit while trying to protect children.

In May 2012, a 73-year-old crossing guard in Westchester was beaten up by two men after blocking their SUV from inching in on a crosswalk, NBC reported. Both were charged with high-level misdemeanors, including a third-degree assault.

State Sen. Jose Peralta hopes the law will help to fill hundreds of crossing guard vacancies around the state by showing “the respect their job warrants and demonstrating that we have their backs.”