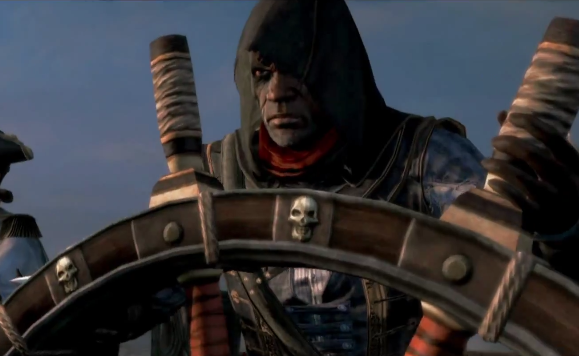 Some familiar faces could be set to feature in Ubisoft’s upcoming current gen Assassin’s Creed title.

Ubisoft has released a new game play trailer for Assassin’s Creed: Rogue, and fans of the series will be pleasantly surprised to find the pirate-turned-Assassin Adéwalé show up in a brief shot.

Adéwalé was Assassin Edward Kenway’s quartermaster aboard the Jackdaw, and would later go on to captain his own ships, the Victoire and the Experto Crede.

In Rogue, however, a much older Adéwalé appears to play the antagonist to “rogue” Assassin-turned-Templar Shay Cormac.

If having Haytham and Adéwalé returning to Rogue wasn’t enough, Assassin’s Creed fans have been speculating that the beige-hooded Assassin who tussles with Shay at about the trailer’s thirty-five second mark is really the younger Achilles Davenport.

Achilles is the Assassin mentor of Ratonhnhaké:ton/Connor Kenway in Assassin’s Creed III.

Fans think that the mysterious Assassin is Achilles because he is clad in Achilles’ old robes, and the house resembles the Davenport Homestead.

As Rogue is set in the 18th century during the Seven Years War, and will complete the North American saga that started with Assassin’s Creed III and Assassin’s Creed IV: Black Flag, an Achilles appearance does make sense.

Assassin’s Creed: Rogue is slated for a November 11 release on the PlayStation 3 and the Xbox 360. No PC version has been announced.