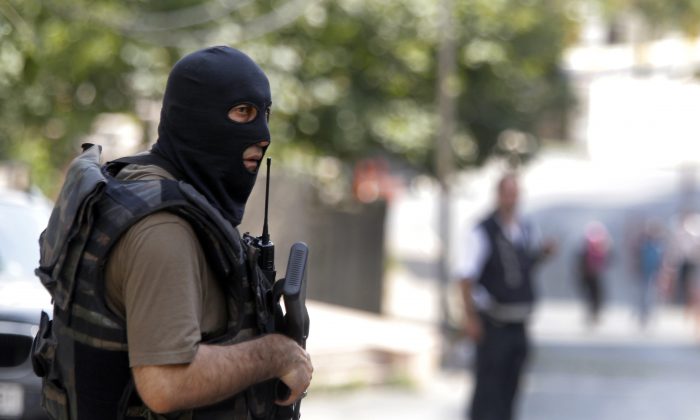 Assailants Fire Shots at US Consulate in Istanbul

ISTANBUL—Two assailants opened fire at the heavily-protected U.S. Consulate building in Istanbul on Monday, touching off a gunfight with police before fleeing the scene, Turkish media reports said.

Police later caught one person in connection with the attack, but provided no details, the state-run Anadolu Agency said. One of the assailants — a woman — was injured in the crossfire and was captured inside a nearby building where she hid, the private Dogan news agency reported. No one else was injured in the onslaught.

Afghanistan: US Consulate in Herat Attacked Via Car Bomb, Gunfire Reported
US Citizens Warned Not to Travel to Pakistan as Lahore Consulate Partially Evacuated

Hours earlier an overnight bomb attack at a police station in Istanbul injured three policemen and seven civilians and caused a fire that collapsed part of the three-story building. Police said the assailants exploded a car bomb near the station. Unknown assailants later fired on police inspecting the scene of the explosion, sparking another gunfight with police that killed a member of the police inspection team and two assailants.

There were no immediate claims of responsibility and it was not known if the assaults were connected.

Also Monday, Kurdish rebels in the southeastern province of Sirnak fired at a helicopter carrying conscripts who either finished their term of duty or were taking leave, killing one of them and injuring one other, the military said. Four soldiers were also killed in Sirnak province, when their armored vehicle was attacked with a roadside bomb, the Dogan news agency reported.

The attacks come at a time of a sharp spike in violence between Turkey’s security forces and rebels of the Kurdistan Workers’ Party, or PKK. Turkey is also taking a more active role against ISIS extremists.

Last month it conducted aerial strikes against ISIS positions in Syria and agreed to let the U.S.-led coalition use its bases for its fight against ISIS. The move followed a suicide bombing blamed on ISIS which killed 32 people and ISIS extremists firing at Turkish soldiers from across the border in Syria, killing one soldier.

On Sunday, the U.S. military announced that a detachment of six F-16 fighter jets and some 300 personnel have arrived at Turkey’s southern Incirlik Air Base to join the fight against ISIS extremists.

Turkey last month carried out a major security sweep, detaining some 1,300 people suspected of links to terror organizations, including the PKK, ISIS and the banned far-left Revolutionary People’s Liberation Army-Front, or DHKP-C.

In 2013, a suicide bombing at the U.S. Embassy in the capital Ankara killed a Turkish security guard and injured one other person. The DHKP-C claimed responsibility for the attack.

Related Coverage
Bomb Scare at US Consulate in Milan, Italy Was False Alarm

Libyan Attack on US Consulate Tied to Elections, Assassination

The U.S. Embassy said U.S. officials were working with Turkish authorities to investigate the incident. The consulate would remain closed to the public until further notice, it said.

Police wearing flak jackets and holding machine guns blocked off streets leading to the consulate. The building, which is surrounded by fortified walls, was intact and its flag was flying.