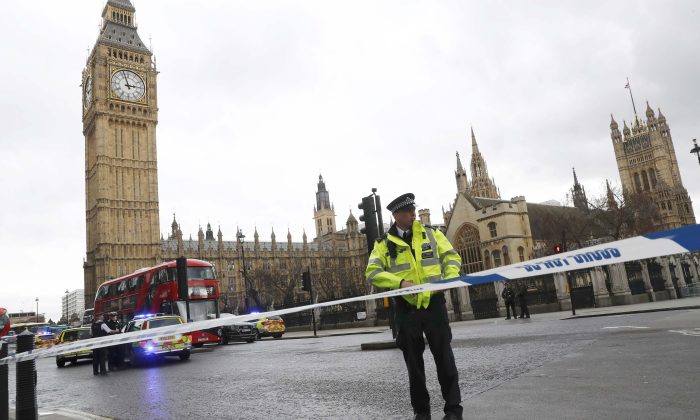 Police tapes off Parliament Square after reports of loud bangs, in London, Britain on March 22, 2017. (REUTERS/Stefan Wermuth)
Crime and Incidents

Assailant Shot, at Least a Dozen Injured in Incident at UK Parliament

LONDON—An assailant was shot outside the British parliament by armed police, the leader of the House of Commons said on Wednesday after loud bangs were heard and a Reuters photographer saw at least a dozen injured people on a nearby bridge.

A parliamentary official earlier said two people had been shot outside parliament and the building was in lockdown. The House of Commons session was suspended and members of parliament who were in the chamber were told to remain there.

BREAKING | This is the moment #UK Parliament in was suspended as “sounds similar to gunfire” were heard outside pic.twitter.com/GXUEjh3vKP

Police said they had been called to an incident at Westminster Bridge, officers were on the scene and it was being treated as a firearms incident.

A Reuters reporter inside the building said medical staff were treating two people inside the gates of the parliamentary estate.

Nearby Westminster underground train station was closed at the request of police.