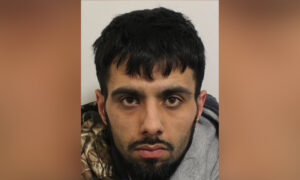 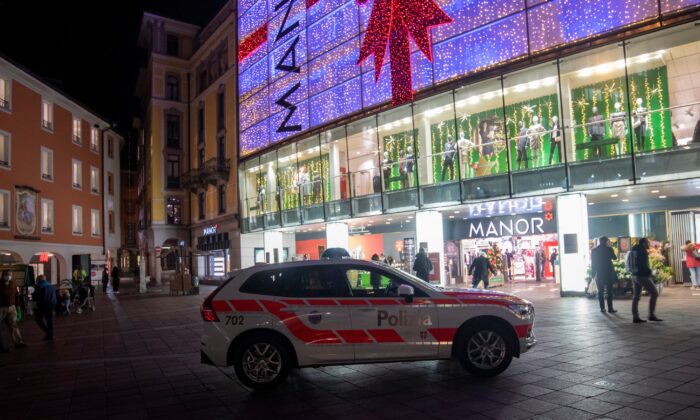 A police car in the area where a stabbing occurred in the department store, in Lugano, Switzerland, on Nov. 24, 2020. (Ti-Press/Keystone via AP)
Europe

ZURICH—A Swiss woman who knifed a victim in the neck and grabbed another by the throat in a Lugano department store on Tuesday was a known jihadist who fell in love with an Islamic terrorist online and tried in vain to meet him in Syria, police said on Wednesday.

Federal prosecutors have called the incident in the Italian-speaking southern canton of Ticino a suspected terrorist attack and taken charge of the investigation.

“Police investigations in 2017 revealed that the woman had formed a relationship via social media with a jihadist fighter from Syria,” the Federal Office of Police (fedpol) said on Twitter.

Turkish authorities turned her back from the border to Syria when she tried to travel there to meet the man, and returned her to Switzerland at the time, it added.

“The woman was suffering from mental health problems at this time. After returning to Switzerland, she was admitted to a psychiatric clinic,” it added, saying she had not come to fedpol’s attention in any terror-related investigation since 2017.

The suspect, a 28-year-old who lives in the area, was in custody after passersby subdued her until police could arrive.

One victim sustained serious but not life-threatening injuries and another was lightly injured.

Neutral Switzerland has so far been spared the kind of large-scale jihadist attacks that prompted France and Germany this month to push for tighter European Union borders after suspected Islamist militants killed eight people in Paris, Nice, and Vienna within a month.

But it has identified hundreds of residents deemed a threat and militants who have traveled to war zones.

Two men arrested in the town of Winterthur this month over possible links to a jihadist shooting attack in Vienna that killed four people on Nov. 2 visited the attacker in July.

In September, a man Swiss media dubbed the “Emir of Winterthur” and described as a leading Islamic terrorist in Switzerland was sentenced to 50 months in prison for ties to the ISIS terrorist group.

Federal prosecutors have said that a fatal stabbing of a Portuguese man in September in the town of Morges, in western Switzerland, was still being investigated for a possible “terrorist motive”. A Swiss-Turkish national has been arrested.