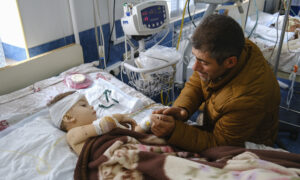 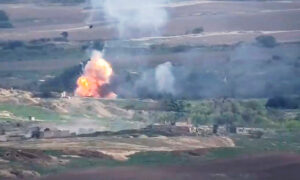 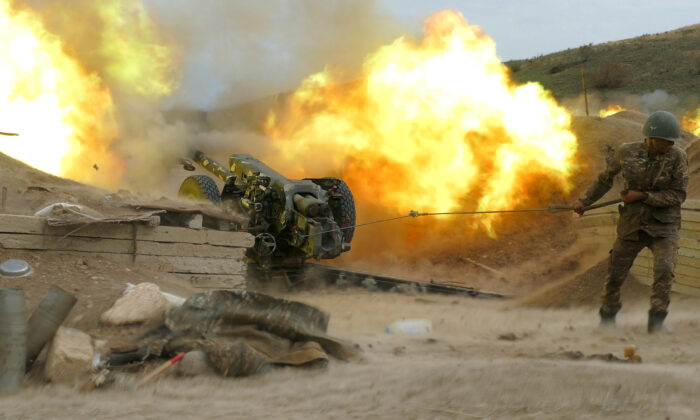 An ethnic Armenian soldier fires an artillery piece during a military conflict over the breakaway region of Nagorno-Karabakh, in this handout picture released on Oct. 5, 2020. (Press office of Armenian Defense Ministry/PAN Photo/Handout via Reuters)
Europe

Assad Blames Turkey for Nagorno-Karabakh Fighting as Battles Rage On

YEREVAN/BAKU—Syrian President Bashar al-Assad accused Turkish counterpart Tayyip Erdogan of being the main instigator in the deadliest fighting between Armenian and Azeri forces for more than 25 years.

In an interview published on Tuesday that is likely to exacerbate international frictions over the clashes in the South Caucasus, Assad also said militants from Syria were being deployed to the conflict area.

Turkey has denied involvement in the fighting in and around Nagorno-Karabakh, a mountain enclave that belongs to Azerbaijan under international law but is governed by ethnic Armenians, and has dismissed accusations that it sent mercenaries to the area.

But Assad told Russian news agency RIA: “He (Erdogan) … was the main instigator and the initiator of the recent conflict in Nagorno-Karabakh between Azerbaijan and Armenia.”

Reiterating accusations first leveled by French President Emmanuel Macron that Turkey has sent Syrian jihadists to fight in the conflict, Assad said: “Damascus can confirm this.”

Assad appeared to offer no evidence for his allegation. Ankara, which backs rebels trying to oust him, did not respond immediately but has described similar accusations as part of attempts by Armenia to create “dark propaganda” about Turkey.

The fighting that broke out on Sept. 27 has increased concern that a wider conflict could be triggered, dragging in Turkey, which has expressed solidarity with Azerbaijan, and Russia, which has a defense pact with Armenia.

The head of Russia’s SVR Foreign Intelligence Service, Sergei Naryshkin, underlined Moscow’s concerns by warning that Nagorno-Karabakh could become a launch pad for “international terrorist organizations” to enter Russia and other countries.

But Russian news agency TASS also quoted him as saying in a statement that he expected Armenia and Azerbaijan to return to the negotiating table.

The fighting is the latest in a decades-old conflict that is closely watched abroad, partly because of Nagorno-Karabakh’s proximity to pipelines that carry Azeri gas and oil to Europe.

Nearly 300 people have been reported killed—and many more are feared dead—in the worst fighting since a 1991-94 war that killed about 30,000.

Azerbaijan says Azeri cities outside Nagorno-Karabakh have been struck, and both sides say the other has hit civilian areas. Each denies targeting civilians.

Nagorno-Karabakh said 244 of its servicemen and 19 civilians had been killed since Sept. 27 and many more have been wounded.

The Azeri prosecutor’s office said 27 Azeri civilians had been killed in the renewed fighting. Azerbaijan has not provided details of its military casualties.

Ceasefire appeals led by the United States, Russia, and France, which have for years led mediation efforts, have failed to halt the fighting.

Turkish Foreign Minister Mevlut Cavusoglu said during a visit to Azerbaijan’s capital, Baku, on Tuesday that international peace efforts had achieved no concrete results in decades and a ceasefire alone would not end the fighting.

“The whole world now needs to understand this cannot go on like this,” Cavusoglu said after talks with Azeri President Ilham Aliyev, who hailed Turkey’s support and Ankara’s “stabilizing role in the region.”

Armenia has said it will engage with Washington, Paris, and Moscow on peace moves. Azerbaijan says Armenia must set a timetable to withdraw from Nagorno-Karabakh and surrounding Azeri territories, and wants Turkey involved in peace efforts.