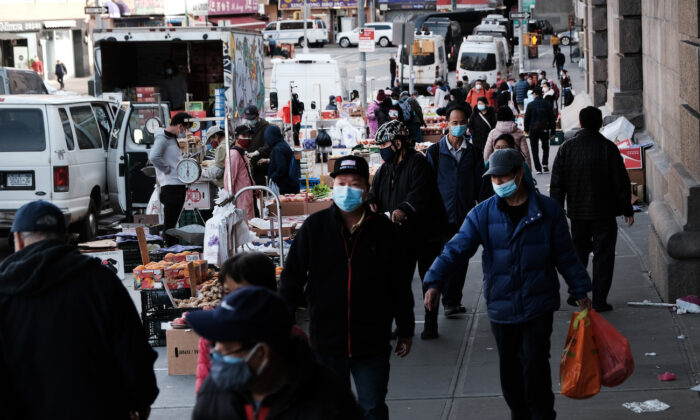 People walk through the streets of Chinatown in New York City, on March 23, 2021. (Spencer Platt/Getty Images)
Crime and Incidents

An Asian woman became unconscious in New York City’s Chinatown on Monday while she was walking down a street and unexpectedly hit in the face.

According to local reports, the woman, 55, was walking on Bayard St. near Mott St. around 6:15 p.m. just before the unprovoked attack.

Surveillance video posted to Twitter by Assemblywoman Yuh-Line Niou, whose district covers Chinatown, showed that the attack occurred while conditions were still bright. The attacker, who was wearing an orange hoodie and denim vest, appeared to have dark skin.

The footage shows that the man took a random swing at the woman’s face and subsequently remarked, “What’d you hit me for?”

The woman staggered backward to the ground while she moved her hand to her face. She hit the concrete on her buttocks and eventually had her back against a pole.

The attacker casually strolled past and turned back, saying, “Why’d you hit me?”

Several people rushed over to check on the woman but by then, she appeared to be unconscious.

Police arrested the man around the block, reported the New York Daily News. He was brought to a hospital for a psychiatric evaluation, law enforcement sources told the New York Post. Charges are pending.

The 55-year-old woman was “conscious and cognizant and alert” as of late Monday, Assemblywoman Niou wrote on Twitter. “Things are being investigated and the hate crimes task force has been called in.”

The attack of the Asian woman comes just days after another Asian woman, 75, was hit randomly in Queens. The NYPD said in a Twitter post in which they released surveillance video of the May 26 attack that the 75-year-old woman suffered fractures to her nose and orbital bone.