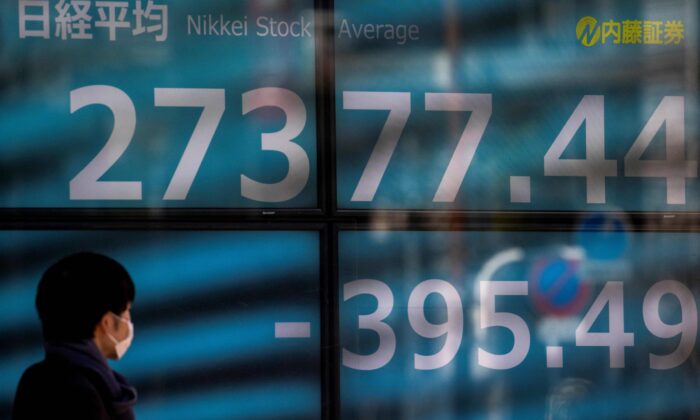 A pedestrian walks past an electronic quotation board displaying the Nikkei 225 index of the Tokyo Stock Exchange in Tokyo, on Jan. 21, 2022. (Behrouz Mehri/AFP via Getty Images)
Markets

Valuations of Asian equities dropped to a 21-month low at the end of January, as expectations of aggressive policy tightening by the Federal Reserve, and a surge in U.S. bond yields hit the regional stocks. The MSCI Asia-Pacific index’s forward 12-month P/E ratio stood at 13.49 at the end of last month, which was its lowest since April 2020, Refinitiv data showed.

That compares with the MSCI World index’s P/E ratio of 17.24.

Last month, a rise in U.S. yields prompted money outflows from the region, which led to big declines in regional shares. The MSCI Asia-Pacific index shed 4.4 percent in January, its worst start to a year in six years. China’s Shanghai Composite Index declined 7.6 percent last month, which pulled down its forward P/E ratio to 10.18, the lowest in Asia.

Shares of tech companies in South Korea and Taiwan also faced big losses due to a spike in bond yields, and their forward 12-month P/E stood at 10.34 and 13.33 respectively.

On the other hand, Indian shares were the most expensive in the region, with a forward P/E of 20.42.

However, some analysts said Asian equities look attractive at these levels.

Suresh Tantia, senior investment strategist at Credit Suisse said valuation of Asian stocks have become less expensive and they have been trading at a discount to global equities.

“With an outlook of over 9 percent EPS growth this year supported by another year of above trend GDP growth, we still expect positive returns over the medium term,” he said.

“We have been underweight or neutral on Asia for the past three quarters, but are now back to overweight Asia. We think they are set to catch up given their previous underperformance.”