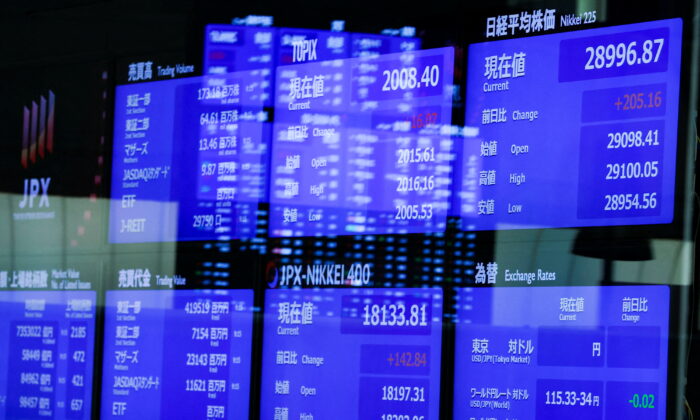 Monitors displaying the stock index prices and Japanese yen exchange rate against the U.S. dollar are seen after the New Year ceremony marking the opening of trading in 2022 at the Tokyo Stock Exchange (TSE) in Tokyo on Jan. 4, 2022. (Issei Kato/Reuters)
Markets

U.S. yields rose on Tuesday as bond investors geared up for interest rate hikes from the Federal Reserve by mid-year to curb stubbornly high inflation.

The shift in market focus back to prospect for U.S. interest rate hikes has revived a rotation out of growth-sensitive stocks, such as tech firms, into ones that offer income, such as financials and industrials.

MSCI’s broadest index of Asia-Pacific shares outside Japan lost 1 percent, after hitting a three-week high the day before, while Japan’s Nikkei was little changed.

“From Asia’s perspective, it’s a slightly more risk-off tone because it’s one of those days where higher bond yields are a bad thing, as, even though they reflect a stronger U.S. backdrop, they tend to be supportive of the dollar rather than local currencies,” said Rob Carnell, head of Asia Pacific research at ING.

“But it’s pretty choppy, tomorrow we might get back to thinking the higher yields reflect a stronger global backdrop,” Carnell said.

He said declines in the Nasdaq have dragged on Asia’s big tech stocks.

U.S. shares were mixed on Tuesday with the tech-heavy Nasdaq falling 1.3 percent, although rising yields boosted banks. Industrial names helped the Dow Jones Industrial Average to a record closing high and the S&P 500 to touch an all-time intraday high.

U.S. five-year notes, which reflect rate hike expectations, soared to their highest since February 2020 on Monday, while two-year note yields hit their strongest level since March 2020.

Benchmark U.S. 10-year treasury yields touched a six-week high on Tuesday and were last at 1.6473 percent.

Minutes from the Fed’s December meeting, due at 1900 GMT, could highlight U.S. policymakers’ newfound sensitivity to inflation and their readiness to tighten policy.

He said he thought declines in tech stocks would be short-lived, while rising yields would help banking stocks.

On the mainland, China Mobile gained 3.4 percent on their Shanghai debut on Wednesday after the company raised $7.64 billion in the country’s biggest public share offering in a decade.

In currency markets, the yen was at 116.04 per dollar having dropped to 116.34 overnight, its lowest since March 2017, while the dollar index, which measures the greenback against six peers, was at 96.226, the stronger end of its recent range.

With the Bank of Japan widely expected to be late if not last in the queue to hike rates, the gap between United States and Japanese yields are rising, hurting the yen.

Spot gold was at $1,814 an ounce, steady on the day and at the upper end of its recent range.