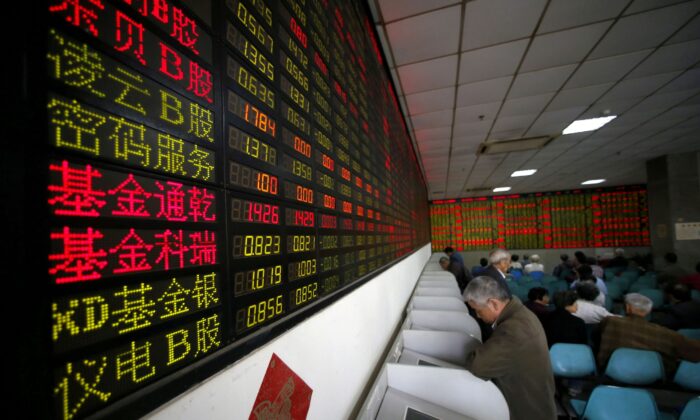 HONG KONG—Asian shares made cautious gains on Thursday, supported by some positive news from cash-strapped developer China Evergrande Group, while the dollar held near a one-month top after the U.S. Federal Reserve took a hawkish tilt overnight.

However, nerves were still frayed about Evergrande’s future and the country’s property sector as a whole, with a major test looming on Thursday when $83.5 million in dollar-bond interest payments by the company were due.

“It’s a long way to go yet in terms of this being resolved,” said Kerry Craig, global market strategist at JP Morgan Asset Management.

“You’ll see some of the immediate fears of a huge collapse and contagion start to recede, but it will still be an issue that pops up because the property market and construction is such a massive part of the Chinese economy.”

As Hong Kong markets came off a holiday, Evergrande’s shares surged 30 percent to mark their best day ever as its chairman sought to reassure investors and as the company’s unit said on Wednesday it had “resolved” a coupon payment on an onshore bond.

Its stock pared gains to trade up 13 percent, lifting the Hong Kong benchmark by 0.7 percent, while MSCI’s broadest index of Asia-Pacific shares outside Japan added 0.5 percent.

Elsewhere, Chinese blue chips gained 0.7 percent, Australia’s benchmark rose 1 percent, and South Korea’s Kospi fell 0.6 percent after returning from a three-day break to catch up with global falls earlier in the week. Japan equity markets were shut for a holiday.

Fears that Evergrande could fail to meet its obligations jolted global markets early this week as investors worried about the spillover effect on banks and property firms from the giant developer defaulting on its debt mountain.

Concerns eased somewhat on Wednesday when the People’s Bank of China injected 90 billion yuan ($13.9 billion) into the banking system.

U.S. Federal Reserve chairman Jerome Powell also downplayed the global impact of the Evergrande saga and said it was more relevant to the Chinese economy.

In another key event for markets, the Fed said overnight it would likely begin reducing its monthly bond purchases as soon as November and signalled interest rate increases may follow more quickly than expected.

“The most striking part of what we learnt from the Fed was that the market was very accepting of it,” Craig of JP Morgan Asset said.

The three major U.S. stock indexes closed up 1 percent, not far off where they were before the Fed announcement, and U.S. Treasury yields were little changed at 1.3023 percent after see-sawing overnight.

The dollar rose after the Fed Chair’s remarks to hit a month-high of 93.526 against a basket of currencies, particularly gaining against the euro and yen, but paused for breath in Asian hours.

By Alun John and Anushka Trivedi