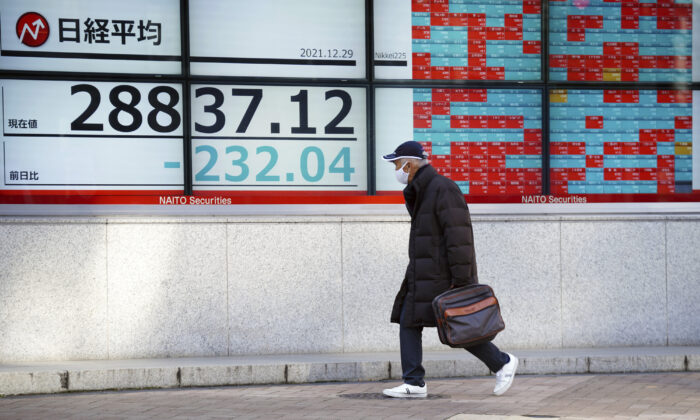 A man wearing a protective mask rides a bicycle in front of an electronic stock board showing Japan's Nikkei 225 index at a securities firm in Tokyo on Dec. 29, 2021. (Eugene Hoshiko/AP Photo)
Stocks

Asia Shares Slip as Investors Ready for End of 2021

HONG KONG—Asian stocks slipped on Wednesday, following a mixed Wall Street session as the region’s investors positioned their portfolios for the new year and continued to grapple with increasing global numbers of Omicron coronavirus cases.

There were losses in Hong Kong, down 0.6 percent hurt by declines in mainland tech stocks while Chinese blue chips shed 0.25 percent.

But in Australia, the ASX 200 was up 1 percent early in the session even though the country’s most populous state New South Wales announced 11,201 new coronavirus cases.

Volatile markets are common in late December as fund managers prepare to rule off their books for the year and holidays thin trading volumes in some major markets like Australia.

“Typically, at this time of year global investors are starting to rethink their portfolio positions and they are looking at the risks going into 2022,” said Jim McCafferty, Nomura’s joint head of APAC equity research.

“Inflation is rearing its head in Europe and the U.S., it’s more contained in Asia, so people are looking to have their portfolios positioned to mitigate inflation. In equities, people are looking at companies that can pass on any future price rises and firms with dividend growth as one way investors can generate income.”

The rising Omicron case numbers are not spooking investors as much as first feared given fatality rates have not soared and the prospects of global lockdowns remains slim.

“Investors are moving ahead and looking at what the impact will be of going back to normal,” said McCafferty.

The Dow Jones Industrial Average rose 0.26 percent on Tuedsay. The S&P 500 hit a record intraday high during the session but weakened to end the day off 0.10 percent. The Nasdaq Composite lost 0.56 percent.

Yields on benchmark 10-year Treasury notes was at 1.4773 percent compared with its U.S. close of 1.481% on Tuesday. The two-year yield, which rises with traders’ expectations of higher Fed fund rates, touched 0.7461 percent after hitting 0.758 percent the previous session, a near two-year high.

This, along with the more cautious mood for equities, helped the dollar firm slightly. The dollar index, which measures the greenback against six peers, was at 96.23, up from a low of 95.958 on Friday.