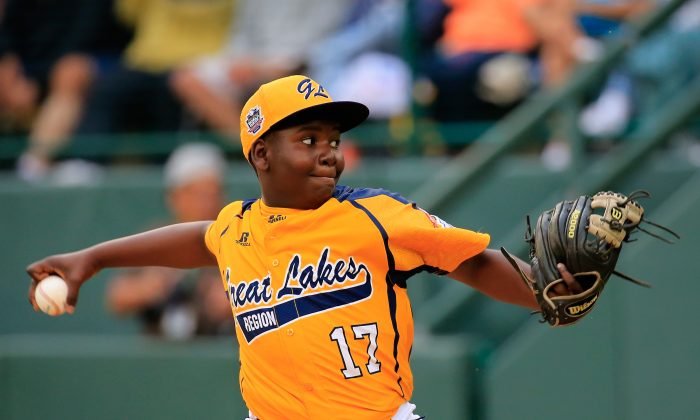 Starting pitcher Joshua Houston #17 of the Great Lakes Team from Chicago, Illinois throws to a batter from the West Team from Las Vegas, Nevada during the fourth inning of the United States Championship game of the Little League World Series at Lamade Stadium on August 23, 2014 in South Williamsport, Pennsylvania. (Photo by Rob Carr/Getty Images)
US

The teams,Seoul from Korea Republic and Taney Youth Baseball Association of Chicago, will play at 3:00 p.m. EDT at Howard J. Lamade Stadium, Pennsylvania.

The game will be broadcast on ABC, and live streaming is available via Watch ABC.

Seoul have a perfect 4-0 record in the Little League World Series, while Great Lakes have a 5-1 record.

CHICAGO—A baseball team from Chicago’s South Side that has been battling its way through the Little League World Series is giving the city something to cheer about.

Hundreds of people who packed a watch party Saturday afternoon at a far South Side community center unleashed deafening roars, danced to blasting music and exchanged hugs as the Jackie Robinson West All Stars defeated a Las Vegas team in the U.S. final in Pennsylvania. With the 7-5 victory, the 11- and 12-year-olds from Jackie Robinson West will face South Korea in the championship game Sunday.

The Chicago team, made up of all black players, is making its first appearance in 31 years in the Little League World Series. But there’s more than baseball at stake for some in a part of Chicago that has grappled with poverty, gang violence and the negative media attention those problems have drawn.

“It means a whole lot to the community and the kids. With all this violence going on, it gives them hope,” said Sabrina Johnson, who was with her 8-year-old grandson, a baseball player in a church league.

Jeanette Baggett, 76, got out of her wheelchair when the team won. Later, she wiped tears from her eyes.

“They’re from Englewood, Rosewood, all over the place, and they can get together and bring a million people out to watch them,” he said, adding that hopefully some gang members were taking note, too.

“These guys can’t go two blocks without shooting somebody. They can learn from these kids,” Stinson said.

Mayor Rahm Emanuel, who has lauded the team as the “pride of Chicago,” was there Saturday, posing for pictures with children.

No matter the final result of the series, the city will celebrate. A parade is planned to welcome the team home on Wednesday.

“The excitement surrounding these remarkable young people has been palpable in every neighborhood of Chicago, and their spirit, positive attitude and success on the field illustrate why they are the pride of the city,” Emanuel said in a statement Friday announcing the parade plan.

The team hails from communities on the South and Southwest Sides of Chicago including Auburn Gresham, Englewood, Chatham, Morgan Park and Washington Heights.

Jackie Robinson, for whom the team is named, became the first black player in Major League Baseball when he joined the Brooklyn Dodgers in 1947, breaking through a barrier that segregated the sport for more than 50 years.

“Whether they know it or not, the youngsters on the Jackie Robinson West team are walking in the footsteps of their famous namesake,” Chicago Sun-Times columnist Mary Mitchell wrote last week, cheering in print the “mothers, fathers, uncles, grandmothers and grandfathers who were willing to haul them to practices and games.”