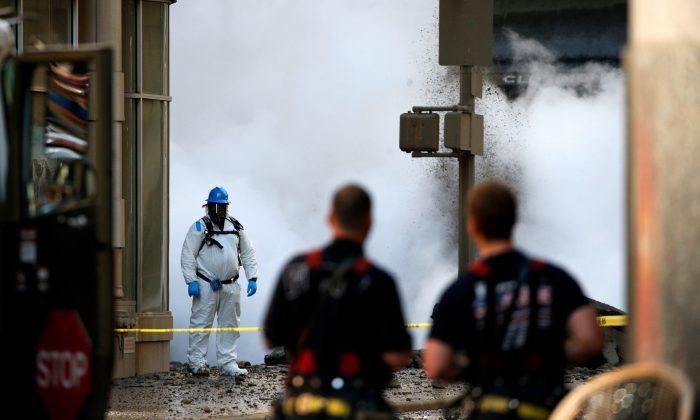 NEW YORK—Residents and workers from 49 buildings near the site of an early-morning steam pipe explosion in Manhattan were evacuated, many for at least two days, on Thursday after lung-damaging asbestos was found on debris from the blast, officials said.

The blast at the start of the morning rush hour near the sharply angled Flatiron Building in bustling Midtown opened a giant crater in the street and creating an urban geyser that sent a vapor plume into the air for hours.

The asbestos discovery raised concerns that the substance, which had encased the 86-year-old ruptured pipe, may have spread to the street, buildings and ventilation systems, all of which would need to be decontaminated, Mayor Bill de Blasio said.

“Now that we know there’s asbestos present, we’re not going to cut any corners,” de Blasio told reporters at the scene. “We’re going to be thorough.”

Street closings and the evacuations of 28 buildings in the “hot zone” near the explosion at Fifth Avenue and West 21 Street will probably last until the weekend while crews decontaminate the area, de Blasio said.

Some of the 49 buildings on the outer fringe of the explosion area may be reopened by Thursday evening, he said.

“People will not be let back into their apartments until we have cleared their building,” the mayor said.

About 500 people from nearly 250 residential units were displaced by the evacuation order, according to the city’s Emergency Management Department.

Authorities said only minor injuries resulted from the explosion of the steam pipe, which was installed in 1932.

New York Governor Andrew Cuomo said he was directing the state’s Department of Public Service to conduct a full investigation into the cause of the explosion and determine whether any utility activities contributed to it.

Officials urged anyone who may be contaminated to shower and remove their clothes, bag them and bring them to Consolidated Edison Inc, the power company that maintains the steam line.

The blast may have damaged other subterranean lines in the vicinity that carry water, gas and electricity, all which have been shut down until repairs are done, Fire Commissioner Daniel Nigro said.

The steam pipes are part of a 136-year-old system that Con Ed said is the nation’s largest steam network, stretching from the southern tip of Manhattan to 96th Street.

Although the blast and the resulting street closings snarled vehicular traffic in the immediate area, other commuting disruptions were minimal.