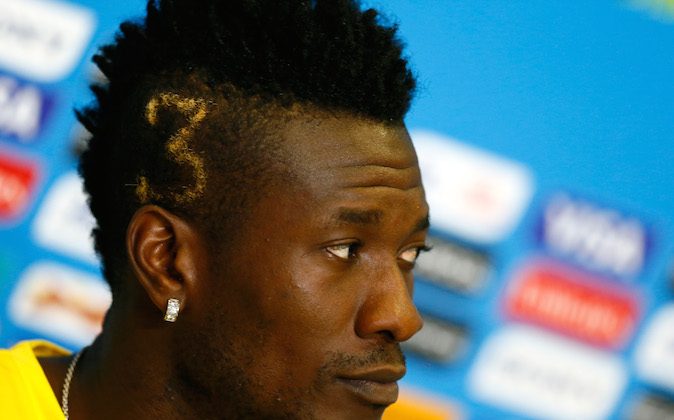 According to GhanaCelebrities.com, Gyan, who is playing for UAE club Al Ain, is seeing Priscilla Safo.

Safo goes by the Facebook moniker MsUrban P Diiva, and could be related to lawyer Adwoa Safo.

It is uncertain if Gyan and Safo are really a couple.

Ghana will be counting on Gyan to see them past the U.S. in their World Cup 2014 game on Monday, June 16, and is included in Ghana’s starting line up.

Check out an AP preview of Ghana’s game against USA.

US Would Be Boosted With at Least Tie vs Ghana

NATAL, Brazil (AP) — The skies may clear by Monday night, when the United States plays Ghana in the World Cup opener.

No matter the weather, the formula for advancing to the second round is evident: get at least a point from the first game.

The Americans have never advanced from the group stage after failing to get at least a point in their opener. They reached the knockout phase after winning their first games in 1930 and 2002, and following draws in 1994 and 2010.

“Statistically, the chances of advancing go way up now if you’re able to get a point or three from the first game,” midfielder Michael Bradley said, “and so we’ve certainly made no secret of the fact that all the focus at this point is about Ghana, and making sure that we do everything we can, so that on June 16, we step on the field and are ready to leave it all out there, knowing that a good result puts us in a really good spot.”

Twenty-four years ago, when the Americans returned to the World Cup after a 40-year absence, midfielder Tab Ramos put charts up at the U.S. team’s training camp in Italy trying to figure outs the odds of advancing. Ramos is now an assistant coach, and in the computer age tons of data are readily available.

Since the World Cup went to a 32-team format in 1998, 85 percent of teams that won their openers advanced to the group stage, according to STATS. That dropped to 58 percent for teams that drew their first games and to 9 percent for those that started with losses.

And the quality of opponent figures to get only more difficult for the U.S. After playing the 37th-ranked Black Stars, the Americans face No. 4 Portugal and close the first round against second-ranked Germany.

“If we can get the win, then we can refocus and go for Portugal,” goalkeeper Tim Howard said. “There’s no sense in looking beyond the first game. It’s important, I think, that we can get three points in the bag.”

Ghana knocked the Americans out of the last two World Cups with 2-1 victories, beating the Americans in group play in the 2006 tournament and in extra time during the round of 16 four years ago. The Black Stars failed in their bid to become the first African semifinalist, losing to Uruguay in a shootout after Luis Suarez used his hands to block what would have been a go-ahead goal in extra time, and Asamoah Gyan sent his penalty kick clanking off the crossbar.

Only four Americans who appeared in the 2010 match are likely to start: Howard, Bradley and forwards Clint Dempsey and Jozy Altidore. Based on their starting lineup in Monday’s 4-0 exhibition win over South Korea, Ghana could return defender Jonathan Mensah, midfielders Kwadwo Asamoah and Andre Ayew, and forwards Kevin-Prince Boateng and Gyan.

“It’s a team full of individual talent with players, certain players that can hurt you in a split second if you’re not alert, if you’re not awake,” Klinsmann said.

After training for four days in the temperate late-autumn weather of Sao Paulo, the Americans traveled northeast Friday to Natal, a tropical beach city just 400 miles from the equator. They were to work out Saturday at the Federal University of Rio Grande do Norte, then again Sunday at the Arena das Dunas, a Populas-designed stadium whose outside structure with 20 curving segments emulates the local sand dunes.

Mexico’s 1-0 win over Cameroon in Natal on Friday was played in a downpour, and it rained again Saturday. The forecast called for more heavy rain Sunday and clearing Monday with the possibility of occasional showers.

“For us everything is ideal,” Klinsmann said. “Whatever the temperature is, whatever the conditions are — rain, no rain, hot, humid, whatever — we are prepared.”

NOTES: Jonas Eriksson of Sweden will referee the game. Manchester City manager Manuel Pellegrini was banned from his team’s bench for two games by European soccer’s governing body after Pellegrini criticized Eriksson for giving Martin Demichelis a red card for a foul on Barcelona’s Lionel Messi in a Champions League game last season.