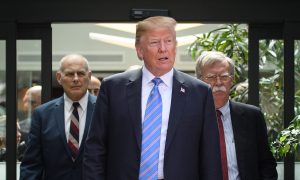 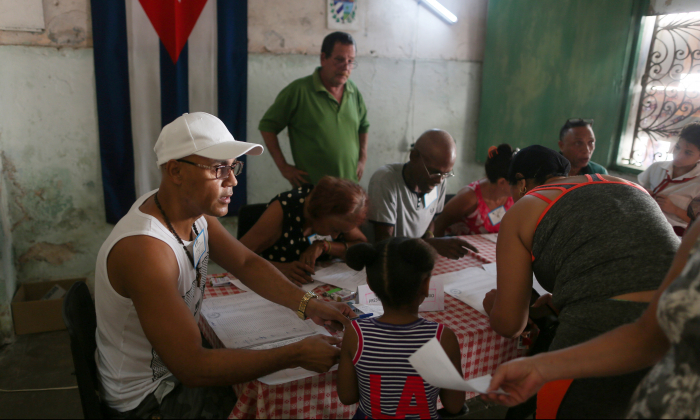 Election officials check the documents of a voter at a polling station during a constitutional referendum in Havana, Cuba, Feb. 24, 2019. (Fernando Medina/Reuters)
World

Cubans Protest in Streets Amid Change in Venezuela, as Trump Predicted

Cubans took to the streets in Havana to protest the communist regime’s new constitution on Feb. 23, proving U.S. President Donald Trump’s assertion that changes in Venezuela will have a ripple effect in Cuba and Nicaragua.

In video footage shared on the personal account of Telemundo reporter Eduardo Rodríguez, a crowd of Cubans is seen walking and shouting on a sunny street in Havana. The Miami Herald reported the next day that a movement opposing the communist regime’s new constitution held a protest in Havana. It’s unclear if the protest in the video is the same as the one referenced in the Herald report.

Trump suggested in an address to the Venezuelan community in Miami on Feb. 18 that change in Venezuela will spread to Cuba and Nicaragua as well, as part of a process of purging socialism and communism from South America.

Public protests are extremely rare under Cuba’s communist dictatorship, but a referendum on the regime’s new constitution has drawn resistance from a vocal opposition movement. The new constitution proclaims, “The Communist Party is the director of Cuban society forever” and that socialism is “irreversible.”

Some 81 percent of the 8.7 million of the electorate had cast votes by 5 p.m. on Feb. 24, an hour before polls closed, according to the national electoral commission. Early results indicated that the referendum succeeded.

Sen. Marco Rubio (R-Fla.), in a Twitter message, called the election “a farce and a fraud of the communist party.” Trump’s national security adviser, John Bolton, voiced support for those resisting the communist regime.

“Cuba’s constitutional referendum today is another ploy of the Cuban regime to cover up its repression and tyranny,” Bolton wrote on Twitter. “The United States supports the Cuban people’s calls for freedom and democracy.”

The constitutional referendum is the first update to Cuba’s governance since 1976. While cementing communism as the permanent guide for Cuba, the document includes references to the recognition of private property, foreign investment, small businesses, the internet, the right to legal representation upon arrest, and habeas corpus.

The new constitution would also restructure government, adding a prime minister and setting term limits for the president, among other changes. The communist regime orchestrated thousands of local meetings to debate the draft of the new constitution last year, but the original draft is nearly identical to the document put forth for the referendum of Feb. 24.

In an uncharacteristic fashion, the communist regime went to great lengths to promote the referendum and the call to vote “yes.” The government has portrayed a “yes” vote as patriotic, while the new constitution’s most vociferous opponents say “no” would be a step toward ending decades of Communist rule.

And with an ever-bolder civil society and more Cubans than ever before connected to the internet, public debate has become more active than in the past. Hashtags such as #YoVotoSi (I vote yes) and #YoVotoNo (I vote no) compete for space on Twitter.

“We can only overcome tyranny if everyone who wants a free and democratic Cuba gives full support … I vote no,” wrote Jose Daniel Ferrer, leader of the Patriotic Union of Cuba, some of whose members have suffered temporary detentions and raids on their homes in the lead up to the referendum.

The communist regime has used its monopoly on traditional media and public spaces to press for approval and censor other points of view. The opposition used social media and door-to-door tactics to call on people to vote no or abstain on the day of the referendum.