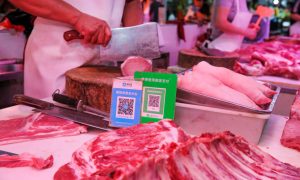 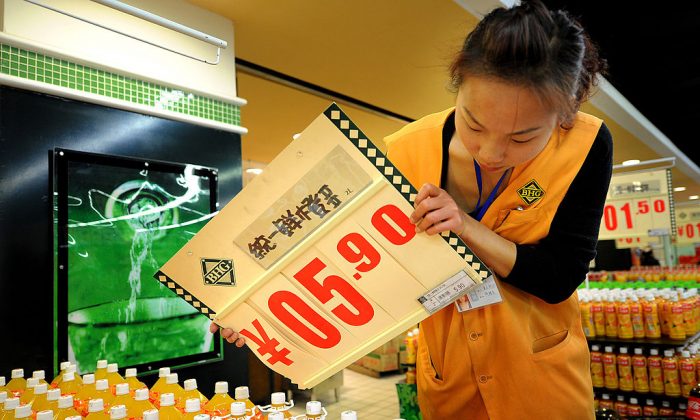 A Chinese worker changes a food price board at a supermarket in Hefei, east China's Anhui province on Nov. 17, 2010. (STR/AFP/Getty Images)
US-China Relations

Beijing issued an emergency control plan to regulate the supply and prices of grains and cooking oil on May 13. The timing comes amid increased trade tensions with the United States, as well as recent news that natural disasters have led to a drop in domestic grain production.

The city’s Commission of Development and Reform claimed that the plan would ensure Beijing’s grain and oil supply and prices are within the normal range, according to a May 13 report by the state-run Beijing News.

But the regulations hint at anxieties over food security.

The commission said it would monitor fluctuations in the average wholesale price of major grain products, such as japonica rice (the most commonly consumed rice variety in China) and enriched flour, as well as cooking oils such as soybean oil. Each product will be assigned an alarm indicator level: safe, moderately dangerous, or severely dangerous, based on the degree of their price fluctuations.

For food security, the Chinese regime has implemented a system of grain reserves. State-run food companies fill warehouses with grain purchased from local farmers, and prices are kept low with subsidies from the central government.

The report quoted an official at the Commission as saying that the plan “takes into account” a long-term outlook, “when China is facing complex domestic and international environments.” The latter is a hint at the current trade dispute with the United States.

Qin Peng, a U.S.-based Chinese commentator on financial issues, told the Chinese-language Epoch Times on May 13 that Beijing’s new regulations are very likely related to the escalation of U.S.-China trade frictions. “Beijing authorities targeted japonica rice, enriched flour, and soybean oil. For the raw material used to make the latter two—China heavily relies on imports from the United States.”

Qin believes prices for enriched flour and soybean oil could go up dramatically as the trade war intensifies.

The U.S. administration on May 10 imposed a tariff increase on $200 billion worth of Chinese imports, raising duties to 25 percent from 10 percent.

In retaliation, Beijing announced on the evening of May 13 that it would boost tariffs, ranging from 5 percent to 25 percent, on $60 billion worth of U.S. goods.

The new tariff rates include 25 percent tariffs on a range of cooking oils such as soybean, peanut, olive, sunflower, and coconut oils.

However, staple food products, such as fresh pork, soybeans, wheat, and sorghum, are noticeably absent from the new tariff list.

Facing insufficient domestic grain production due to droughts and a spreading crop disease, Beijing appears to have left U.S. imports of staple crops off the new tariff list to avoid a food crisis.

Chinese authorities recently confirmed that a destructive pest called fall armyworm has already plagued many parts of China. Fall armyworm has no natural predators in China and can cause significant damage to crops such as corn, rice, wheat, sorghum, barley, sugarcane, soybeans, and peanuts. All these factors have put great pressure on China’s food supply.

And with trade negotiations having ended in Washington last week with no reached agreement, U.S. imports are an uncertain future.

Qin believes that based on Beijing’s habitual behavior of aggressive retaliation, the authorities could further escalate tariffs or even enact an embargo on U.S. agricultural imports—leading to further price increases for grains and cooking oils in China.

The widespread outbreak of African swine fever in China, which has led to scores of pig deaths, has already caused a sharp increase in pork prices.

In April, China’s CPI rose by 2.5 percent year-on-year, the highest level since November 2018, according to the latest data from China’s National Bureau of Statistics. Pork prices rose by 14.4 percent.

Epoch Times commentator He Jian pointed out that China’s neighbors in the South China Sea region are another source for agricultural imports. However, due to China’s aggressive actions to assert its sovereignty claims in the South China Sea, its relations with those countries are rocky. If the diplomatic situation there worsens, it may also affect food prices, He said.

He noted that Beijing’s recent regulations to curb rising prices could be an attempt to prevent unhappy consumers from challenging the authorities’ rule.