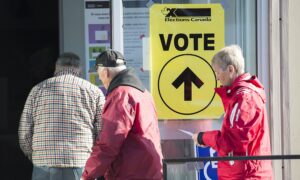 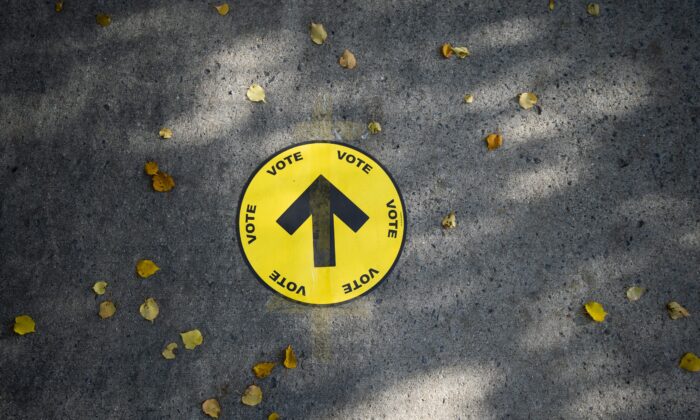 A sign directing voters to a polling station is taped to the sidewalk during the 2019 federal election, in Ottawa, on Oct. 21, 2019. (The Canadian Press/Justin Tang)
Viewpoints

As They Head to the Polls, Canadians Want a Positive Vision to Embrace

On Sept. 20, Canadians will be heading to the polls in a federal election for the second time in two years and some two years ahead of schedule.

Justin Trudeau’s election call surprises nobody. On average, minority governments in Canada only last for 18 months as they are taken down either by a non-confidence vote or by design. Despite turbulent times due to the pandemic, the Trudeau government is sitting well in the polls. The pandemic is somewhat under control right now and the economy appears to be recovering. The Liberal Party hopes to snatch a majority government while conditions are right. It is a sound strategic decision from a political perspective.

With the clock now ticking, opposition parties must clearly define who they are and what their goals are. If polls are to be believed, Canadians have made it clear they are willing to support Trudeau despite his foibles.

In 2015, the Conservative Party of Canada (CPC) ran a campaign based on convincing voters that Trudeau wasn’t ready for power. Voters responded by giving the Liberals a majority.

In 2019, opposition parties hoped that scandals involving WE Charity and Trudeau’s multiple past blackface incidents would end his reign. While the Liberals were reduced to a minority government, Trudeau remained prime minister and he appears to have recovered in popularity.

Canadians may be ready for change, but it is clear that they want to vote for somebody rather than against somebody. Simply pointing out the shortcomings of Trudeau and his government is not going to be enough. Challenging parties have to positively differentiate themselves from the Liberals and sort out what role they want to hold in Parliament. They don’t have much time left.

The Green Party is in turmoil due to political infighting. The best they can hope for is to consolidate their existing support enough to maintain a seat or two in key ridings. They may as well stick to ideological purism and their environmental focus.

The Bloc Quebecois will maintain its mandate of soft-secessionist policies putting Quebec first. Leader Yves-Francois Blanchet will focus on expanding the BQ’s seat count in Quebec and won’t have to bother himself with any issues in the rest of the country. This keeps his campaign goals simple and focused. Quebec is going to be a battleground with many hotly contested seats in this election. The BQ will have to target their ridings carefully and field strong local candidates.

The NDP under Jagmeet Singh is going to have to pick a lane. The NDP was the first out of the gate with its formal platform release. It appears that they want to appeal to the dedicated left with what was a rather shallow “tax the rich” message. That concept appeals to a core of left-leaning voters of course, but will it draw voters away from the Liberals?

Singh repeatedly propped up the Liberals on confidence votes over the last couple of years. The NDP has to straddle a line between pragmatism and idealism in Parliament as it remains dedicated to the pursuit of socialism while ostensibly trying to win elections. The closest that the NDP will ever come to power is as an opposition party holding the balance of power, but that is a weak campaign point to make. It looks for now as if Singh intends to consolidate his hold on seats in left-leaning ridings without trying to expand his support.

As the only conceivable contenders for a majority government, the CPC under Erin O’Toole has the toughest task of all. O’Toole has struggled in maintaining party support since winning the leadership. Splinter parties formed by disaffected conservatives are picking away at the CPC’s support base while the party can’t seem to gain any traction with common Canadians.

O’Toole’s strategy has been to try and moderate the CPC through aligning closely with what the Liberal Party proposes. When O’Toole flip-flopped and embraced a carbon tax, he invigorated the Maverick Party and put urban seats in Western Canada at risk. When he ranted about wealth inequality, Maxime Bernier’s People’s Party got a boost from fiscal conservatives. When O’Toole kicked Derek Sloan out of the party, social conservatives sought new homes for their votes. The strategy appears to be to make the CPC indistinguishable from the Liberal Party aside from the leadership—and it isn’t working. Trudeau will continue to win that popularity contest.

A lot can change in the relatively short time of a campaign period. The electorate is stressed and irritable after having lived through an extended pandemic. Voters can and will swing their support to different parties if they are presented with the right vision.

Simply approaching voters and saying “Vote for me because I am not Justin Trudeau” won’t be enough, however. Electors want to see something positive to embrace, and challengers to the Trudeau Liberals are going to have to find and deliver that platform within the next five weeks.