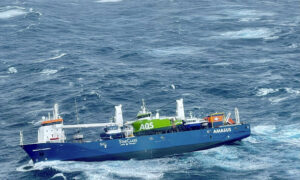 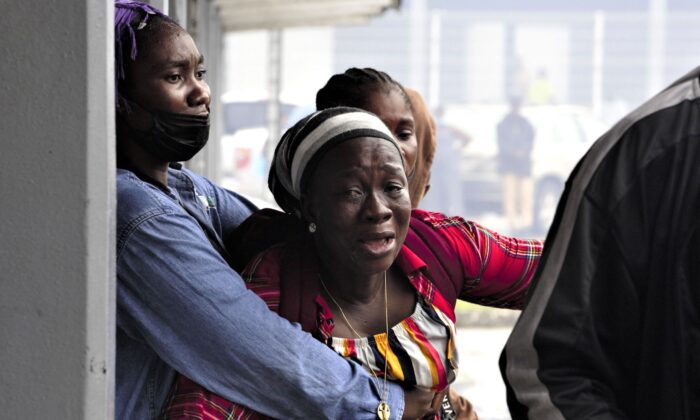 A woman reacts as she doesn't see a relative among the survivors of the sunken cargo ship Niko Ivanka who arrive at John F. Kennedy Memorial Hospital in Monrovia, Liberia, on July 19, 2021. (Carielle Doe/AFP via Getty Images)
Africa

As Many as 17 Missing After Cargo Ship Sinks Off Liberia

MONROVIA—As many as 17 people were missing from a cargo ship that sank off the coast of Liberia over the weekend despite being barred from setting sail, the Maritime Commissioner said.

The Liberian-registered Niko Ivanka left the capital Monrovia on Saturday for a port in the West African country’s south, despite being under a detention order for failing to meet basic safety requirements.

The vessel sent out a distress signal that afternoon, notifying the coastguard that it had taken on water. By the time authorities arrived, it had already partially sunk.

Eighteen people were on the ship’s manifest, 11 of whom had been rescued during a 36-hour search, commissioner Eugene Nagbe told reporters on Monday.

But those rescued said that there were in fact about 28 people on board, leaving 17 missing.

“For now, our concern is a search and rescue mission,” Nagbe said. “My focus is the lives of those people missing.”

“The vessel was not a passenger-authorized vessel and yet it had passengers on board,” Tonpoe said. “So in the coming days, investigation will establish how many people were on board.”

It was not clear how or why the ship was able to leave harbor or whether it was carrying any cargo at the time. The vessel’s owner, a Chinese national, was arrested on Sunday afternoon, Nagbe said.

Among those listed on the manifest were a Swedish captain, a Chinese crew member, and nine members of West Africa’s regional school examinations body.