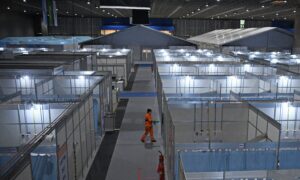 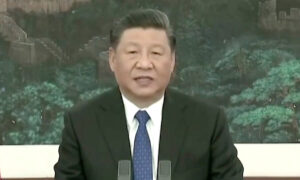 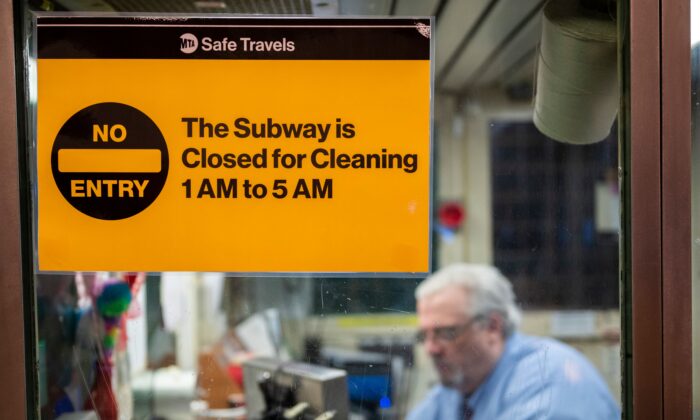 A sign stating the New York City subway is closed is displayed on a Mass Transit Authority (MTA) ticket booth at the Coney Island station in Brooklyn, N.Y., on May 6, 2020. (Corey Sipkin/AFP via Getty Images)
AMERICA

As in 1918, New York May Use Staggered Work Hours to Keep Subway Safe

As New York City makes plans to reopen in the coming months, officials are dusting off the playbook from the 1918 flu pandemic, when businesses were ordered to begin their work days at staggered times to prevent the subway from becoming a vector of disease.

The idea, then and now, is to spread riders through the day to avoid the kind of crowding health experts fear could turn the subway into a breeding ground for the CCP (Chinese Communist Party) virus which has killed over 20,000 people in the city.

Talks over staggered hours and days for offices are still at an early stage, a member of the New York state’s reopening panel told Reuters. Coordination could prove complex in a city of 220,000 businesses, most of them smaller firms.

But Patrick Foye, chairman of the Metropolitan Transportation Authority, has been making the case to business leaders, signaling that he sees it as key to restoring confidence in the tangled web of 665 miles of track that ferried 5.5 million people a day before the lockdown in March.

Foye told a May 6 call organized by the Association for a Better New York that he sees staggered work hours and days as “part of the answer” to congestion, citing the 1918 response.

“It’s the expectation of employers that something like that will have to be worked out if they are going to get their people back on the trains,” she said.

During the 1918 pandemic, the New York City health commissioner, Royal Copeland, staggered starting and ending times for most businesses by 15-minute increments. While it is unclear what impact the move had, New York ultimately fared better than other cities—it had a death rate of 4.7 per 1,000 residents, far lower than Philadelphia at 7.3.

New York City is unlikely to reopen in a meaningful way until the fall. Even then, workers will likely return in phases, if at all. Employees of technology firms Twitter and Square, for example, have been given the option to keep working at home.

“As we try to reopen the economy the use of buildings is obviously going to change. We should be talking about implementing staggered shifts,” said Kyle Bragg, president of service workers union 32BJ SEIU.

But some officials have said they are not convinced the subway is a root cause. One skeptic is Cuomo, who has cited data showing transit workers with below-average infection rates and a hospital survey indicating most patients had not used public transit.

Even so, transit and health experts say the MTA needs to go beyond disinfecting cars at night, the mandating of masks, and other steps already taken. One common proposal is more frequent trains, especially on lines where people stand shoulder-to-shoulder during peak times.

“That’s the only way to help with the social distancing, so that you clear the platforms quickly and there are fewer riders on the trains,” said Elodie Ghedin, a former professor of global public health at NYU who is now at the National Institutes of Health.

That would require money the MTA doesn’t have. It received $3.9 billion in emergency federal funding, but is asking for $3.9 billion more to compensate for the 93 percent drop in subway revenues.

For now, companies are making their own plans. Marsh & McLennan Cos, a Manhattan-based insurance and risk management group, said it instructed office leaders to make plans for staggered teams at the office and to determine whether commuters should travel at off-peak times.

Authorities were looking at how best to use technology, including apps that could direct commuters to use trains or subways at certain times based on capacity, Wylde said, a tool that did not exist in 1918.