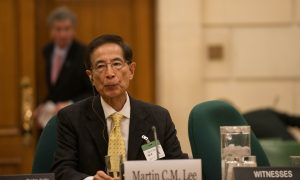 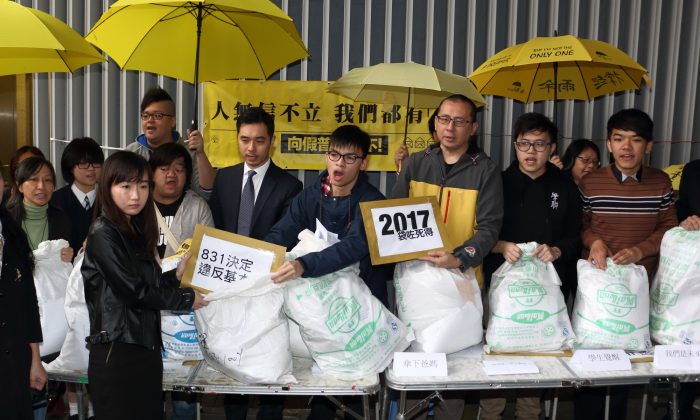 At a press conference outside the city’s legislature late afternoon Wednesday, eight local groups submitted about 10,000 petition letters from residents to the Hong Kong government.

Scholarism, Hong Kong Federation of Students, Students Awaken, Student Fight for Democracy, Umbrella Parents, Umbrella Blossom, We are the Future Campaign, and Progressive Lawyers Group spent about a month collecting the letters from different districts and during a mass rally on Feb. 1.

The Standing Committee of the National People’s Congress (NPCSC)—China’s rubber stamp legislature—ruled last August that Hong Kong’s five million eligible voters can freely pick the city’s leader during the 2017 elections—but only from two or three candidates screened by a small pro-Beijing nominating committee.

Angered by Beijing’s decision to withhold true democracy, an estimated 1.2 million Hongkongers occupied key roads in three parts of the city for 11 weeks in what is known as the Occupy protests or the Umbrella Movement.

And there’s some concern in the pro-democracy camp that the government is abusing public broadcasting to sway public opinion.

The Progressive Lawyers Group recently called out the government for publicizing their campaign on radio and television. Convener Kevin Yam told Hong Kong media that broadcasters are breaking the law as the city’s Broadcasting Ordinance forbids the airing of political ads.

And because there’s no longer any large pro-democracy movement to remind the people of the need for “genuine universal suffrage,” Ivan Law, the chairman of the Hong Kong Federation of Students’ standing committee, says it’s unclear what the public now thinks about China’s reform proposal.

“People are only getting the government’s opinion because they keep promoting their message on public channels,” Law told Epoch Times.

Pan democrat lawmakers, however, have vowed to vote against a reform plan based on the Aug. 31 decision. Any proposal has to be passed with two-thirds majority in the Legislative Council before it can be submitted to Beijing for approval.

Oscar Lai hopes that the pan democrats, who hold 40 percent of the seats in LegCo, stick to their word.

“Otherwise, voters will respond accordingly in the next [LegCo] elections,” said Lai.