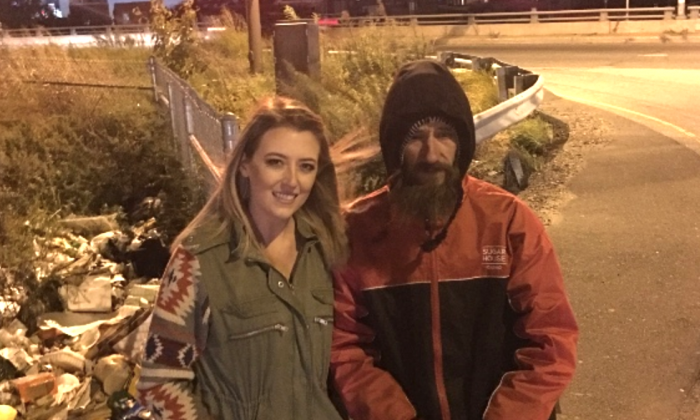 As Act of Kindness Results in $380K for Homeless Veteran, Now He Wants to Give Back

Nearly $380,000 have been raised for a homeless veteran who helped a stranded woman get back home safely—his act of kindness has garnered national attention.

Johnny Bobbitt, a 34-year old Marine Corps veteran, spent his last $20 to help Kate McClure, 27, buy gas after her car broke down on the I-95 exit ramp near Philadelphia.

In a touching interview that aired Sunday on ABC’s “Good Morning America,” Bobbitt was reunited with McClure for the first time on television and says that he wants to give back.

The veteran says he was left speechless by the generosity he received.

“I just got her gas to help her get back on her way. I didn’t think anything about it. I wasn’t expecting anything in return,” he told “Good Morning America.” “That’s how I got the money to start with—from other people. [I had to] return the favor. I can’t constantly take and not give back.”

It all happened two months ago when McClure was driving into Philadelphia’s Center City district to meet a friend. She was driving alone on I-95 when she ran out of gas. It was close to midnight.

“I pulled over to the side of the road as far as I could and I was going to get out and walk to the nearest gas station because it was not that far away, and that’s when I met Johnny,” she told Good Morning America. “He walked up and he said, ‘Get back in the car. Lock the doors. I’ll be back.’ I was just like, ‘OK.”

Bobbit used the only money he had left—$20 he previously collected from panhandling that day to buy McClure gas for her car.

He even filled her car up himself.

“I almost couldn’t believe it,” McClure told Good Morning America. “I said, ‘Thank you…I swear, I’ll be back. I promise I’ll be back to give you [the] money back.'”

McClure kept her promise. She and her boyfriend, Mark D’Amico, visited Bobbitt multiple times after his selfless act. They gave him gift cards, cash, and toiletries. Bobbitt lived near the place where her car broke down.

The couple then decided later one day to create a GoFundMe page to raise money for Bobbitt so he wouldn’t have to spend the holidays on the streets.

Their GoFundMe page shows their goal was to reach $10,000. But they never imagined that their crowdfunding would reach nearly 38 times that amount.

“I wasn’t expecting it,” Bobbitt told Good Morning America. “[I was] just helping someone out…I was glad to offer the help when somebody needed it.”