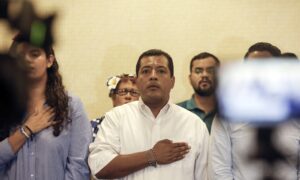 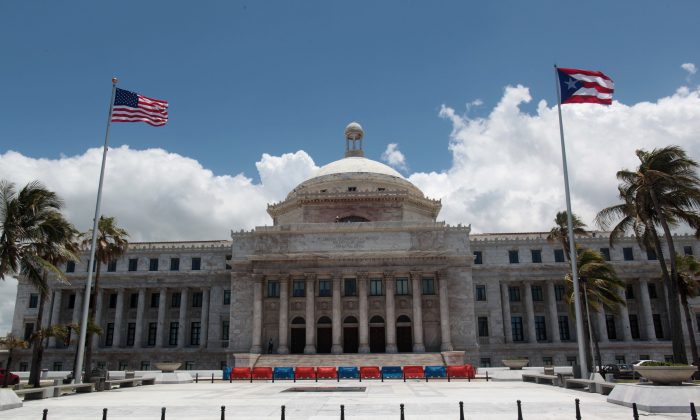 The flags of the U.S. and Puerto Rico fly outside the Capitol building in San Juan, Puerto Rico on May 4, 2017. (REUTERS/ Alvin Baez)
Americas

NEW YORK—Against a backdrop of crumbling towns and failing schools, Puerto Ricans on Sunday will cast votes on whether their struggling island should become the 51st state.

The status referendum, Puerto Rico’s fifth since 1967, is unlikely to change the island’s label as a U.S. territory, a move that would require an act of the Congress.

But the vote is culturally important and timely for an island whose hazy political status has contributed to an economic crisis that pushed it last month into the biggest municipal bankruptcy in U.S. history.

Sunday’s plebiscite will offer voters three options for Puerto Rico: to become a U.S. state; to remain a territory; or to become an independent nation, with or without some continuing political association with the U.S.

Congressional apathy “doesn’t mean the vote’s not worth doing, because this kind of vote is the only way out of a colonial situation,” said Columbia Law School Professor Christina Duffy Ponsa, an expert on Puerto Rico territory issues who supports statehood.

Hamstrung by $70 billion in debt and a 45-percent poverty rate, Puerto Rico is battling woefully underperforming schools, and near-insolvent pension and health systems.

Its 3.5 million American citizens do not pay federal taxes, vote for U.S. presidents or receive proportionate federal funding on programs like Medicaid.

Governor Ricardo Rossello campaigned on holding a referendum and believes U.S. statehood is the island’s best hope. His PNP party, which controls Puerto Rico’s government, is premised on a pro-statehood stance. The opposition PPD supports versions of the current territory status.

Ramon Rosario Cortes, a Rossello spokesman, told Reuters the governor will push Congress to respect the result, “and we expect they will respect the will of 3.5 million American citizens.”

But Puerto Rico is seen as a low priority in Washington and “Congress won’t do anything,” said U.S. Rep. Luis Gutierrez, an Illinois Democrat of Puerto Rican descent, who supports making the island an independent nation.

Support for independence is more prevalent among the Puerto Rican diaspora in the United States than in Puerto Rico itself, where that option historically earns just a few percentage points in referenda.

Rossello had hoped to fund Sunday’s vote with federal dollars in order to make it harder for Congress to ignore the result.

Congress authorized $2.5 million for a Puerto Rico status referendum in 2014, but required the Justice Department to approve the ballot’s language in order to release the funds.

In April, the department rejected initial ballot language that would have excluded the option to remain a territory, prompting Rossello to change it.

But Justice “has not reviewed or approved the current” language, a department spokesman told Reuters.

Since referenda are usually organized by pro-statehood groups who oppose the status quo, the question of how to treat the territory option is sticky.

If organizers do not include a territory option on the ballot, as Rossello initially did not, they risk being seen as politically inequitable to roughly half the population that supports territory status.

Yet including the option, which organizers believe is tantamount to colonialism, runs counter to their objective of changing the island’s status.

The last referendum, in 2012, used a two-step structure, first asking voters whether they wanted Puerto Rico to remain in its current status, then asking them to pick a preference among non-territory alternatives.

While statehood won, PPD leaders instructed constituents to leave blank hundreds of thousands of ballots, calling the result into question.