As Coronavirus Rages On, Chinese Regime Promotes Its Containment Efforts 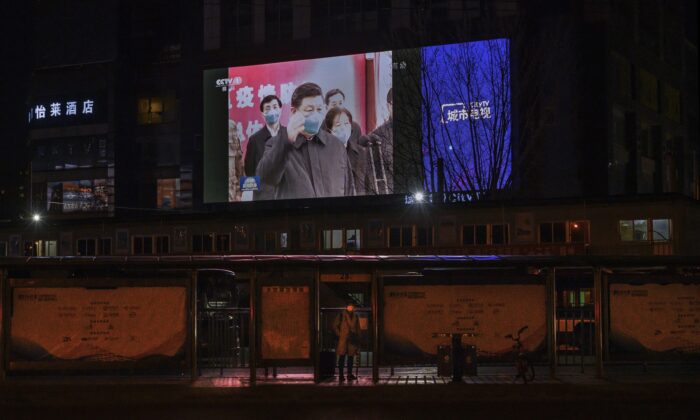 A large screen in the street shows Chinese leader Xi Jinping wearing a protective mask during his visit to Wuhan, the epicentre of the coronavirus, on CCTV's evening newscast in Beijing on March 10, 2020. (Kevin Frayer/Getty Images)
By Nicole Hao

With COVID-19 infections skyrocketing in countries outside China, the Chinese regime has recently ratcheted up propaganda portraying its containment measures as a model for others to follow.

Chinese authorities on March 11 sent a seven-member medical team to Italy, where the epidemic is most severe outside China. This is the first team Beijing has dispatched overseas since it began calling itself the world’s rescuer.

The group included doctors and experts from Chinese universities, China Red Cross, and the Chinese Center for Disease Control and Prevention.

More than 10 Chinese state-run media outlets then highlighted comments made by Maurizio Massari, Italy’s permanent representative to the European Union, about China’s assistance.

Since late February, the Chinese regime has begun spreading the narrative that its response to the epidemic has successfully contained the virus.

Chinese ambassador to the United States Cui Tiankai published an opinion article in USA Today on Feb. 28, in which he said: “As a responsible country, China has also erected a Great Wall of disease prevention for the world.”

The Chinese embassy in France, in a March 2 article on its website, praised the Chinese regime for taking action to protect the “community of common destiny for humankind” from the virus. The expression is commonly used by Beijing to promote its geopolitical ambitions, such as Belt and Road Initiative projects.

The article also praised Chinese leader Xi Jinping for sharing information about China’s prevention measures with the leaders of more than 10 countries.

Though Chinese state media claim that the epidemic in China is under control, Chinese netizens have begged for help online, saying the situation in Wuhan, as well as major Chinese cities such as Beijing and Shanghai, is still severe.

Meanwhile, some local authorities throughout China haven’t yet lifted their quarantine measures, such as locking down residential compounds, quarantining all individuals suspected of infection, and closing down public spaces such as restaurants, markets, and entertainment facilities.

Locals say that many are still sick.

Ahead of Xi’s visit to Wuhan on March 10, Wuhan officials shut down all 14 makeshift hospitals that had been set up to treat patients with mild or moderate symptoms, saying that with fewer patients, the facilities were no longer needed.

A Wuhan doctor’s spouse told Epoch Times affiliate NTD in an interview that some patients who were released from local hospitals hadn’t actually recovered, and later transmitted the virus to their neighbors in Hanyang district.

On March 11, a Wuhan netizen posted an online video, saying ambulances have sent patients with heart failure to the Wuhan Asian Heart Hospital. However, they couldn’t be treated at the hospital because all 108 emergency department beds were occupied.

Wuhan Asian Heart Hospital became one of the city’s designated hospitals for treating coronavirus patients on Feb. 2, while also continuing to receive patients with heart disease, according to the Hubei provincial health commission.

The netizen said the hospital recently changed its criteria for diagnosing the coronavirus—via a blood test, which resulted in a large influx of patients.

Blood testing is a newly developed method. Zhong Nanshan, China’s top coronavirus expert, said on Feb. 27 that a patient infected with the virus will have a specific antibody in the bloodstream.

As state media focused on outbreaks in foreign countries, officials have begun restricting foreigners from entering. On March 11, the Beijing city government announced at a daily press conference that travelers who arrive in Beijing from any foreign nation must be placed under quarantine for 14 days.

He Qinglian, a prominent Chinese author and economist, said on Twitter on March 1 that the Chinese regime’s propaganda efforts can be classified into four stages: drawing out positive stories from the crisis, promoting a conspiracy theory that the virus came from the United States, promoting a narrative that “China has won again,” and spreading the message that “China saves the world.”

At the time of that post, Beijing was promoting the narrative that “China has won again.”

Soon after, Chinese authorities, through media and diplomatic efforts, appear to have started the final phase. Under the so-called “community of human destiny,” the government claimed that China would use its “successful experiences” to help the world control and prevent the spread of the outbreak.