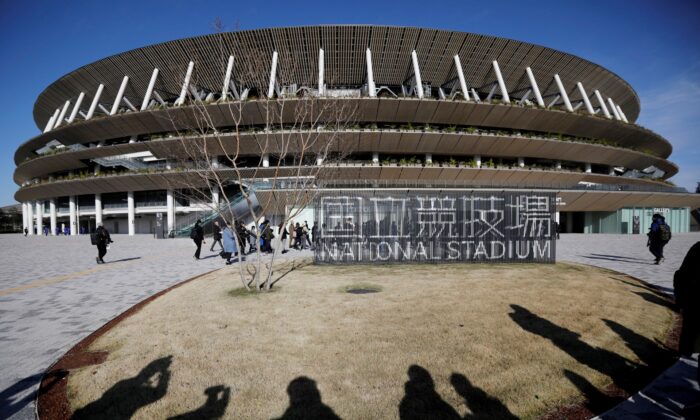 General view of the new National Stadium, the main stadium for the Tokyo 2020 Olympics and Paralympics, on Dec. 15, 2019. (Issei Kato/File Photo/Reuters)
WORLD

Abe’s call on Wednesday came as Tokyo’s baseball league said it would hold games without spectators until March 15. Two businesses in central Tokyo confirmed infections a day after the government told firms to get staff to work from home or stagger commutes.

An 80-year-old man who had not traveled overseas and had no known contact with an infected person died in a Tokyo hospital, media reported, while the northern island of Hokkaido—the region most affected after Tokyo, reported a death, taking Japan’s total to six, including four from a cruise liner.

Hokkaido will close some schools from Thursday through March 4.

“Taking into account that the next one to two weeks are extremely important in stopping the spread of infection, the government considers there to be a large risk of transmission at sports, cultural events and large gatherings of people,” Abe said in parliament.

By mid-afternoon on Wednesday, Japan had close to 170 cases of infections from the flu-like virus, separate from the 691 reported from a cruise ship quarantined off Tokyo this month.

The disease that originated in China’s central city of Wuhan late last year has spread rapidly, infecting about 80,000 people globally and killing more than 2,700, the vast majority in mainland China.

Japan has shifted strategy in fighting the contagion, seeking to slow its spread and minimize the number of deaths.

Earlier on Wednesday the minister in charge of the Olympics sought to quell fears the event could be canceled.

International Olympic Committee (IOC) member Dick Pound said the Games were more likely to be canceled than postponed or moved if the virus threat forced a schedule change, the Associated Press said, with a decision needed by May.

“The IOC is preparing for the Tokyo games as scheduled,” Minister Seiko Hashimoto said in parliament, when asked about Pound’s comment. “We will continue our preparations so that the IOC can make sound decisions.”

Last week Tokyo postponed training for Olympic volunteers, and on Wednesday, Toshiro Muto, chief executive of the organizing committee, said it would scale back the torch relay to limit spread of the virus.

Japan’s professional baseball organization said it would hold all matches scheduled until March 15 without spectators.

Separately the national sumo association told Reuters a board meeting on March 1 would discuss whether to proceed with a spring tournament due to start in Osaka on March 8. Japan’s professional soccer league has already called off all domestic games in the first half of March.

The shadow over the Olympics grew as advertising giant Dentsu Group Inc, which is deeply involved in the Games, told employees to work at home after an infection at its Tokyo headquarters.

Its shares hit a seven-year low amid the Games concerns.

Property developer Mitsubishi Estate Co said one of its skyscrapers in the Marunouchi business district had been visited by an infected person.

Three infections were confirmed on Wednesday in Hokkaido, while checks on an elderly person who died the previous day in the city of Hakodate confirmed a fourth, Governor Naomichi Suzuki told a news conference.

By Sakura Murakami and Rocky Swift