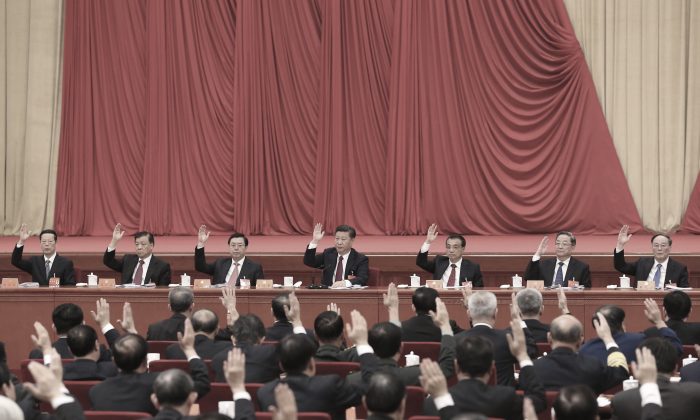 Chinese leader Xi Jinping (C) and other members of the Politburo Standing Committee attend the Sixth Plenary Session of the 18th Central Committee in Beijing on Oct. 27, 2016. (Li Xueren/Xinhua via AP)
China

As ‘Core’ Leader, China’s Xi Jinping Can Shake Up Regime

On paper, Chinese Communist Party chief Xi Jinping has no need to affirm his status as China’s paramount leader.

Xi sits at the head of several key Party commissions that can override the state; he is commander-in-chief of a military now loyal to him; and his anti-corruption campaign has purged rebellious cadres. And he is already promoting his own supporters.

Still, Xi felt the need to assume the title of “core” leader at a recent Communist Party meeting in Beijing, called the Sixth Plenum. In February, the Epoch Times anticipated Xi’s ascendancy at the plenum.

The term has an almost sacred status in the atheist Communist Party. One can be a leader without being “core,” but a core leader, in theory, answers to no one else.

The changes that this will bring to China are still unclear—but it’s likely that Xi Jinping will use his newly acquired power to bring down the former Party leader Jiang Zemin, who oversaw two decades of entrenched corruption and a violent political campaign against one of China’s largest spiritual groups. Given the multiple crises that the Communist Party is facing, Xi may also leverage his new position to remain in power past his designated term and even introduce institutional reforms that change the face of Chinese politics.

The title of “core,” or “hexin” in Chinese, was inaugurated by Deng Xiaoping, the leader after Mao who oversaw China’s economic modernization. Deng conferred core status posthumously on Mao Zedong, and later bestowed it upon his successor Jiang Zemin.

Jiang, however, never passed on the title of supreme leadership to Hu Jintao, instead hobbling him with “collective leadership”—code for Jiang in charge via his proxies.

Meanwhile, Xi Jinping appears to have accrued enough power to seize the crown for himself. Signs of Xi’s ascendancy surfaced this January, but it was only recently that it became official. Xi’s hand will be strengthened further next year, when all top leaders except him and his premier, Li Keqiang, will be forced to retire.

Since taking office, Xi Jinping has given subtle indications that Jiang’s signature policy—the persecution of the Falun Gong spiritual practice—is no longer in favor, and the culture of corruption fostered by Jiang is coming to an end.

With Xi stressing accountability at the highest levels of leadership, Jiang and his associates may be snared by the extraordinary state wealth that they stole. “Officials who are corrupt aren’t always part of Jiang Zemin’s clique,” said Li Tianxiao, an independent political commentator, “but the grossly corrupt officials usually are.” Anti-corruption investigators report spending days, and the use of several trucks, to confiscate the loot of officials linked with Jiang Zemin.

As the Party’s new power center, Xi may now have sufficient political strength and legitimacy to give Jiang a deathblow in the form of prosecution and sentencing.

But Xi’s centralizing power for the sole purpose of arresting a predecessor or eradicating corruption doesn’t seem like his endgame.

One danger of the title is that he might now be blamed for all of China’s ills, including a slowing economy and longstanding social problems.

But if he wishes to overhaul China’s system of government, such immense power is a precondition.

Hints of systemic change have surfaced this year.

In August, Xi announced a reorganization of the Communist Youth League, which is structurally similar to the Party. Party scholars have also given interviews with overseas press about the regime looking into the “Singapore model” of administration. A former member of Hu Jintao’s think tank broached the once taboo topic of Mikhail Gorbachev’s democratic reforms in a reputable Chinese financial magazine.

And Xi appears to be ready to do damage to the reputation of the Party. State broadcaster China Central Television recently aired a series of remorseful confessions of high-ranking officials, highlighting their lavish lifestyles and ill-gotten wealth.

Given that no successor has yet been even hinted at, it is possible that Xi Jinping may be preparing for some sort of institutional reform with himself at the center.

“Xi is preparing to take a knife to the regime … and [to play] a bigger game of chess,” said Li Tianxiao.

If Xi has no heir by this time next year as per succession norms, it will be all but certain that his leadership ambitions exceed the standard two five-year terms of Party leaders. At that time, in the face of a discredited Communist Party and angry populace, Xi may find that his best option lies in major institutional reform, and he will perhaps see himself elected as the first president of a post-communist China.