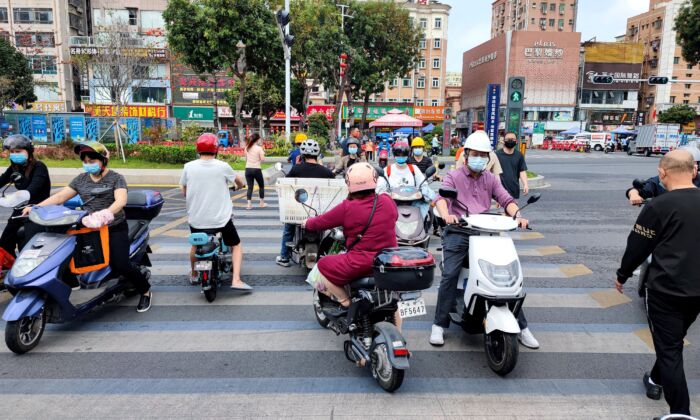 Residents are riding scooters along a street after the city was reopened following a lockdown against COVID-19 outbreak in Shenzhen in China's southern Guangdong Province on Mar. 21, 2022. (STR/AFP via Getty Images)
Chinese Regime

Local officials in China’s Shenzhen city are struggling to keep their cities running, even with the central regime’s newly branded “dynamic zero-Covid” policy, but will be dismissed if they challenge it.

“It’s very hard for the government to maintain operations. Nobody works [under lockdown]. We can’t collect any tax,” Guo Qiang (Pseudonym), an official from Guangdong Province’s Shenzhen, told the Chinese-language Epoch Times on March 21.

Guo revealed difficulties that the local government is facing under the Chinese Communist Party’s zero-COVID policy. Over the past two years, hundreds of Chinese people have told The Epoch Times of the difficulties they have faced under the government’s lockdown, including no access to food, medicine, baby formula, and hospital treatment despite government assurances that they would get assistance to ensure their needs.

On March 21, the authorities in Shenzhen lifted a lockdown on most of the city, and allowed the residents to go back to work. However, for at least two neighborhoods the next day, authorities announced more infections and reimposed a lockdown. This risk of being forced into lockdown has put a strain on all sectors of society and is proving a strain looking forward.

Other Chinese cities with COVID-19 outbreaks are also facing a similar situation to Shenzhen.

Guo said that Chinese officials are under huge pressure, with city leaders unable to reach agreements with the central government on measures to curb the COVID-19 outbreak.

If they strictly follow the central regime’s COVID-19 zero-tolerance policy, the economy of the city will worsen quickly. The consequences include the local government being unable to support its operations, including paying the officials’ salaries and benefits. Also, the officials will lose their positions sooner or later without a good economical performance by their city. The regular residents will lose more benefits because they can’t work but have to pay more money to buy food and other essential items. Price increases have been dramatic in locked down areas.

If authorities allow people to move around freely, they worry that the outbreak will deteriorate, the consequences of which include immediate dismissal.

“The two goals of the regime are contradictory. One goal is to let the factories and companies get back to work, the other is to strictly control people’s movement,” Guo said. “Even the orders [that the city regime released] are contradictory … We, the lower level officials, don’t know which order we should follow and we are confused.”

Guo said that officials prefer to bear the lockdown rather than open up because “[we] have to make sure we won’t be dismissed tomorrow.”

On March 21, the first day the Shenzhen authorities lifted a lockdown on most parts of the city, people flooded the streets, the subway, and the buses.

According to videos posted on social media as well as Hong Kong media reports, one of the city’s subway stations had hundreds of people crowded inside one waiting to board the train, while hundreds more crowded outside waiting to enter.

“I have waited for 40 minutes [on the platform]. I still can’t enter the train,” Malaysia’s Chinese media ChinaPress quoted a Shenzhen netizen saying on March 21.

Li Jing (Pseudonym), a resident in Shenzhen, told the Chinese-language Epoch Times on March 21 that he, his family, friends, and colleagues were eager to work after having been locked down at home for over a week.

“Today is the first day [out]. We have been locked down for so long. We really need to work. We need to earn money,” Li said. “We couldn’t earn any money for such a long time, but needed to pay for rent and food. The regime didn’t give us a penny.”

On March 20, a video went viral on social media platforms. In it, a middle-aged man pleaded to police, saying that he needed to leave his village for work.

“I don’t damage the society. I need to make a living. I need to feed my family. [If you don’t allow me to go out], I will die today. Please show me what I can do?” the man pleaded.

The Chinese regime charges people who don’t follow its zero-tolerance policy with the crime of damaging society.