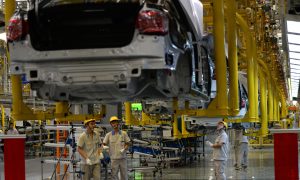 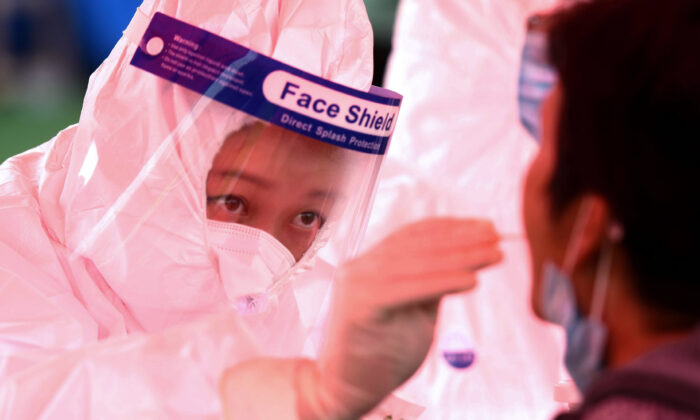 A health worker (L) takes a swab from a resident to be tested for COVID-19 as part of a mass testing program following a new outbreak in Qingdao in China's eastern Shandong Province on Oct. 14, 2020. (STR/AFP via Getty Images)
INSIDE CHINA

After a cluster of COVID-19 cases recently emerged in Qingdao, the Chinese regime began a campaign to test all of the city’s residents, about 11 million people, within five days.

On Oct. 17, authorities claimed they found no new infections.

Exulting the all-negative results, Chinese state media reports praised authorities for combating the outbreak and “leaving the world in awe” with its speedy testing.

The city has publicly confirmed 13 patients, including one in critical condition and two in severe condition—one of whom has shown signs of recovery, Qingdao’s Vice Mayor Luan Xin said in an Oct. 20 press conference.

Luan also said authorities found “ample evidence” proving the latest outbreak stemmed from frozen foods contaminated with the CCP virus, which causes COVID-19, warning that the pathogen can survive in low temperatures for a prolonged period.

Experts have said there’s no scientific evidence to suggest that the virus can be spread via frozen food.

International experts and local residents, however, viewed such glowing accounts with skepticism.

“Amazing. But how is that possible?” said Chen Shih-chung, Taiwan’s minister of health and welfare, in a speech on Oct. 17 in Taipei.

“You probably know how it works in our country. On some issues, our government doesn’t allow commoners to have even a bit of knowledge,” one resident said. The interviewees’ names have been withheld because of safety concerns.

Another doubted authorities were telling the truth.

“I know they don’t have such efficiency. This data could all be made up at will,” he said. “They’re basically going through the motions to ease public anxiety.

“This government has zero credibility. We don’t believe what it says, but because it’s an authoritarian government, there’s nothing we could do.”

Reached by The Epoch Times, district and city-level disease control authorities and local hospital staff deflected questions about testing and claimed they had minimal involvement.

The city’s disease control center has only 200 staff members, while district branches have dozens of workers each, making it “impossible for them to lead” the mass testing, one officer said.

Dong Yuhong, a viral infectious disease expert at the Swiss-based biotech firm SunRegen Healthcare, said that COVID-19 nucleic acid testing must take place in designated biosafety labs graded Level Two and above. Given that a virus lab at a regular hospital usually has the capacity to process hundreds of virus samples in one day, it remains a question of how Qingdao was able to complete the testing so quickly, she said.

Dong also noted other logistical issues due to the large quantity, such as proper storage of samples and testing kit availability.

One official at the Qingdao Municipal Center for Disease Control Prevention was asked by The Epoch Times about how so many tests could be completed in such a short period of time.

“Just trust the government. … As long as it’s been issued by the government, there should be no issues. Just put your mind at rest,” he said.

The official said there was a delay in sending residents their results due to the mass amounts of data that needed to be filed. The testing results would need to be relayed through multiple government agencies, from the district level all the way to national, before being counted into the country’s overall COVID-19 data, he said.

“It takes time,” the officer said. “There’s no local cases, be sure about that.”

He declined to answer any other questions, saying that “it’s better you ask the [city] government.”

The Epoch Times asked multiple testing sites about their response to public concerns about accuracy of the test results. One staff member replied that testing at larger medical facilities would likely be more accurate, but still “cannot guarantee the testing results to be absolutely correct.”