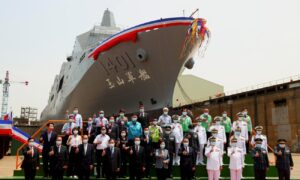 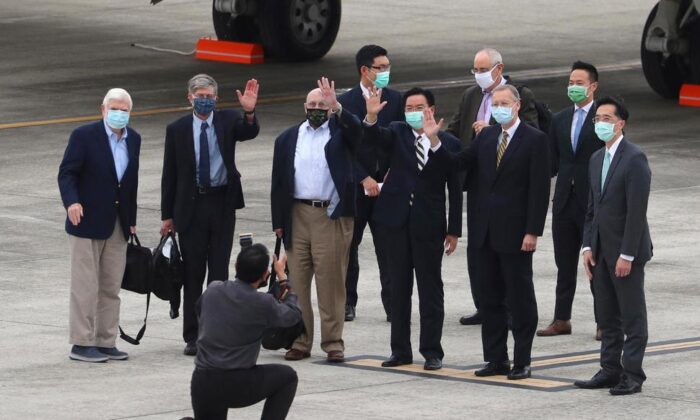 China described its military exercises near Taiwan as “combat drills” on April 14, upping the ante as senior former U.S. officials arrived in Taipei on a trip to signal President Joe Biden’s commitment to Taiwan and its democracy.

Taiwan has complained about the proximity of repeated Chinese military activity, including fighter jets and bombers entering its air defense zone and a Chinese aircraft carrier exercising off the island, which is claimed by Beijing.

Beijing views self-ruled Taiwan as part of its territory and has vowed to bring the island under its fold by force if necessary. Since last year, it has ratcheted up its military aggression toward the island, prompting criticism from the United States and its allies. This year, the regime has been sending aircraft over Taiwan’s ADIZ on a near-daily basis.

“It is a solemn response to external forces’ interference and provocations by Taiwan independence.

“The PLA’s military exercises and training operations are sending a signal that our determination to curb Taiwan independence and Taiwan–U.S. collusion is not just talk.”

China has previously offered little public comment on its recent military actions near Taiwan. Its defense ministry referred to them only as “military activities” in late January.

The United States, which like most countries only officially recognizes the Chinese regime and not Taiwan’s government, is nonetheless Taipei’s strongest international backer and has watched tensions mount with growing alarm.

Former U.S. Sen. Chris Dodd and former Deputy Secretaries of State Richard Armitage and James Steinberg arrived in Taiwan on April 14 in an unmarked private jet in what a White House official called a “personal signal” of the president’s commitment to Taiwan and its democracy.

Taiwan presidential office spokesman Xavier Chang said the trip “again shows the Taiwan–U.S. relationship is rock solid and is a full expression of cross-party support for Taiwan in the United States.”

Tsai has repeatedly said Taiwan is an independent country called the Republic of China, its formal name.

Ma, the Chinese regime’s spokesman, said the meeting of the U.S. officials with Tsai “will only exacerbate the tense situation in the Taiwan Strait” and that it doesn’t matter whether it’s being cast as an official or unofficial visit.

Since the Trump administration, the United States has steadily dialed up its engagements with the democratic island. President Donald Trump sent two senior officials to visit Taiwan last year.

On March 28, U.S. Ambassador to Palau John Hennessey-Niland arrived in Taiwan as part of a Palau delegation headed by President Surangel Whipps. Palau is one of Taiwan’s 15 diplomatic allies.