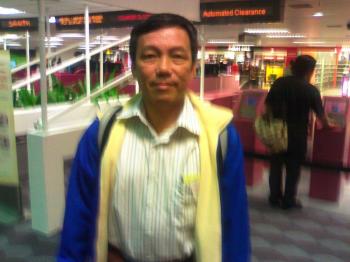 Liman, from Indonesia, stands at the airport in a photo taken with his cell phone. He was turned away by officials at the Singapore airport who did not explain why. (Courtesy of subject)
World

As APEC Approaches, Singapore Turns Some Away

Zheng Xin
View profile
Follow
biggersmaller
Print
Singaporean border officials denied entry to two Falun Gong practitioners on Oct. 19 and 22 who had previously frequented the country, one from Indonesia and the other from Malaysia.

As the Asia-Pacific Economic Cooperation (APEC) Summit in November approaches, the practitioners believe hosting officials are concurrently engaged in a politically motivated attempt to limit the presence of Falun Gong practitioners in the areas where events will be held.

Officers from the Ministry of Home Affairs called two meetings with local practitioners, intimating in the first, and stating explicitly in the second, that they were expected to stay away from the Merlion and Esplanade Parks starting November.

“They do not want to ‘lose face’ in front of foreign media and international leaders,” said one Falun Gong practitioner who attended the first meeting.

Six Falun Gong practitioners have been arrested in Esplanade Park in recent weeks after meditating and sticking up posters depicting the persecution of Falun Gong in China approximately 2,600ft. from Suntec City, the center of the APEC meetings. They were charged with "vandalizing public property" and face a verdict on Nov. 2.

Often practitioners in Singapore, and around the world, meditate and practice exercises in public, as well as hand out materials detailing human rights abuses in China.

Liman, an Indonesian citizen and practitioner of Falun Gong, was denied entry to Singapore when trying to visit his hospitalized mother on Oct. 22.

When his passport was scanned at customs, authorities gave what Liman described as a “vague explanation” about why they needed to take him aside for questioning.

Liman, 55, said visiting his mom was his only agenda in Singapore and that he had no intention to stay in the country. He said he suggested authorities could send personnel to accompany him to the hospital if they did not trust him, but the entreaty was rejected.

He was sent back to Jakarta instead, after being locked in a room while waiting for his flight, and being followed at the airport by security personnel.

“With my mom this seriously ill, as the eldest son I can’t even go see her. My heart is very sad. This approach by Singaporean authorities is very inhumane,” Liman said. “Singapore’s denial of my entry is completely unwarranted.”

Liman believes he was denied entry because he practices Falun Gong, a spiritual practice which is persecuted in mainland China.

The Singaporean government has economic ties with the Chinese regime, and there is a pattern of arrests and alleged harassment of Falun Gong adherents in Singapore around the times that Chinese leaders visit. When queried about the relationship between these two data sets, police said it was coincidental, according to a Falun Gong practitioner interviewed previously.

Liman says that he’s travelled into and out of the country a dozen times without problems in the past, which he said reinforced his suspicion that the denial was politically motivated.

Another Falun Gong practitioner and Malaysian resident Madam Tham Kam Mooi was refused entry into Singapore when travelling with her daughter and friends on Oct. 19.

Tham, 54, had travelled in and out of Singapore on a weekly basis to visit her daughter earlier this year, with no difficulties, she said.

After scanning Tham’s passport at customs, the officer told her that she was denied entry because of an order from “higher-ups.” Tham was also told that she needed to fill an application for entry permission online that takes two to three weeks to be approved.

Tham’s daughter said she was puzzled by her mother’s ineligibility to enter Singapore. “I am really surprised and find it very strange,” she said, “If she still needs to fill out an online application and wait two to three weeks for approval, then this is stricter than [procedures for] Chinese citizens entering Singapore.”

Earlier this year Tham went to practice Falun Gong exercises at Merlion Park, a popular tourist site. Although police didn't ask for her ID, she said people were taking photographs and videos of her.

With additional reporting by Matthew Robertson.