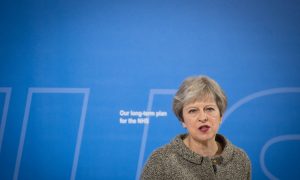 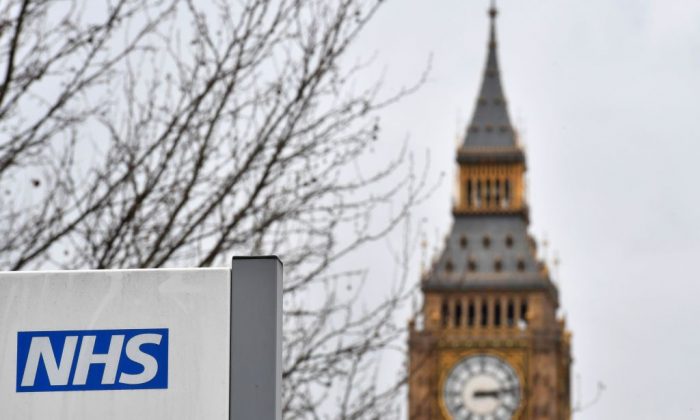 A NHS (National Health Service) sign is pictured outside St Thomas' Hospital, near the Houses of Parliament, in central London on March 8, 2017. Britain's economy will grow by 2.0 percent this year, sharply up on a previous forecast of 1.4 percent, finance minister Philip Hammond said Wednesday in his budget statement. Hammond also announced a two billion pound increase in spending for social care, over the next three years, in an effort to tackle pressure on the NHS. (BEN STANSALL/AFP/Getty Images)
Viewpoints

Some nine years ago, I wrote a report in The Daily Telegraph describing the saga of a London neighbor whose life was saved by the British National Health Service, best known as the “NHS.” She was 76 at the time and, after becoming violently ill, had collapsed while on an overnight stay at a friend’s home. I will not deny that the socialized medical system of the United Kingdom worked tirelessly to bring her back from the brink of death.

On the other side of the coin, the computer system at the hospital and her doctor’s office did not match; they were pumping her full of penicillin, but there were no records available to refer to. Thank goodness I knew she was violently allergic to penicillin.

Fast forward to 2019: NHS computer systems still don’t match; millions have been spent on unification to no avail. I have to physically walk my blood results to my primary care doctor and to my liver and diabetes specialists at Imperial College NHS hospitals because my cancer hospital, run by its own Trust, has a different IT system. There is really nothing like the extremes of good and bad that characterize the NHS.

An attempt to restructure the NHS—most recently by putting primary care physician-led clinical commissioning groups in charge and empowering patients—was “so big you could probably see it from space,” in the words of David Nicholson, a former NHS chief executive.

It is now acknowledged that it was a disaster. Prime Minister Theresa May and former Health Secretary Jeremy Hunt admit the radical changes only damaged the NHS. In my doctor’s office, we lost all six of our doctors; the new system was unworkable and one of the partners changed professions.

Needless to say, the nationwide obesity epidemic and the vast influx of millions of migrants from the European Union has placed even more of a burden on a health service already beleaguered by government cuts. Yes, there are private hospitals for those who can afford them; I had BUPA (private insurance) for 35 years, but one of the worst experiences of unpunished malpractice happened to me and 17 other women by a surgeon who was both NHS and private.

Before I move on to the issue of poor UK cancer outcomes, I feel it is vital to share some experiences. In September 2014, on the very day the NHS had reduced services at the emergency departments of a number of hospitals under government austerity, I fell and broke my shoulder and upper arm.

Despite the fact that, by some miracle, my primary care doctor was walking home on that same street and was able to use her special code to speed it along, the ambulance took an hour to arrive. Once I had arrived at St. Mary’s Hospital, Paddington, at 9:15 p.m., a neighbor who had accompanied me pleaded with the desk for action, but none resulted; there must have been 100 people waiting to be seen. Only at 2 a.m. was I X-rayed.

The resident doctor told me the fractures were serious but that there were “no orthopedic beds”—I would have to go home. My friend, aged 85, insisted a bed be found for me. I was sent to a side room where, under sedation, a doctor tried to “reset” my shoulder, but that did little as the fall had smashed the rotator cuff.

I lay in a cubicle alongside a staff kitchen for several hours. The smell of food drove me nuts. As dawn broke, I screamed, “I’d get better care in Afghanistan!” By mid-morning, I was taken to a bed in the dementia ward, where I languished for eight days.

My lymphodema sleeve from a previous cancer operation was stuck on my rapidly swelling arm and eventually a hematoma formed. To my astonishment, there was no lymphodema practitioner in that famous teaching hospital.

I didn’t want surgery until my heart was checked, but that didn’t happen, so after eight days, I was ordered to go home by an aggressive discharge officer. The nurses, and indeed the elderly ladies in my room, protested as they’d arranged a birthday cake for me, but he and his equally abrasive colleague made me pack up and leave. Eight days in the dementia ward: shambolic and Third World-like mismanagement.

Six months later, I suffered from severe back pain. On a Friday morning, to her credit, my primary care doctor’s receptionist had suggested I have a troponin blood test, but I had to argue with the laid-back locum to have it included on my blood work. NHS patients may have only 10 minutes with a primary care physician, but I managed to get blood taken.

I lived through that weekend, but on Monday evening, my doctor—the same one who had rescued me from my fall—called me and said I was in full flow of a major heart attack, and to get to St. Mary’s at once as my troponin was 1,500; normal was 15.

At St. Mary’s, the angry receptionist and truly vile triage nurse did not believe me and could not find my doctor’s fax. There were about 100 people waiting to be seen. Chaos. By the time a registrar saw me at 10 p.m., my troponin was 2,000.

A CT scan was done at 12:30 a.m. and then more dithering took place. I was terrified of having an angiogram, but to the credit of the NHS, the paramedics and ambulance driver who took me at 3 a.m. to Hammersmith Hospital stayed during an emergency angioplasty, but all of this would have happened that Friday before had the lazy locum looked at my notes: diabetic, hypertension, family history of stroke, and so on.

At the hospital where I am having chemotherapy, there is a framed display of about 18 thumbnail images of “managers.” I served on a Clinical Commissioning Group user panel from 2008–2017 at NHS headquarters and saw first-hand how “top-heavy” management was not the way to solve the clinical issues, delays, bed shortages, and poor cancer outcomes that plague the NHS.

Austerity has hurt the NHS, but there is much money mismanagement.

Cancer outcomes depend most on early detection. But, in 2010, a phlegmatic oncologist told me to “go and enjoy the World Cup and Wimbledon and come back to me at the end of the summer” when I was walking around with a stage 2, 3/4 inch breast tumor.

Luckily, my sister in Philadelphia had sent me a magazine from her doctor’s office, and I decided to respond to an item about the Scottsdale Cancer Center. I faxed them my records and had an alarmed response from Dr. Robert Kuske, who said that a Triple Negative patient like me must have treatment immediately. He told me that he and his colleague Dr. Victor Zannis would be devastated if I “didn’t make it” and suggested the tumor could quickly grow to over an inch and stage 3. I high-tailed it to another London hospital and indeed the tumor had grown. Surgery followed.

The two on-the-ball American doctors had actually saved my life.

Cancer statistics for 2018 indicate the UK still lags grievously behind most European countries. A Feb. 12, 2018, report by Deloitte states: “Lung cancer is the deadliest type of cancer in the UK, claiming a total of 35,486 lives in 2015. Based on five-year survival rates, the UK ranks 21st out of 27 other European Union countries … the UK also ranks 14th for blood cancer, 20th for pancreatic cancer, 21st for brain cancer and 24th out of 27 for stomach cancer.”

What is the answer? I am puzzled by the fact that in 2017 the U.S.-based Commonwealth Fund think tank ranked the NHS top on its list of health care systems in 11 prosperous countries. They cited “administrative efficiency.” Really? Facilities for an increasingly aging population are lagging behind and mental health care is under-funded. A recent King’s Fund think tank study of 21 Organization for Economic Co-operation and Development member countries reported the UK being among the lowest in per capita numbers for doctors, nurses, and hospital beds in the Western world.

To me, one of the most significant drawbacks of socialized medicine is the edict that primary care physicians restrict the amount of time they can give to patients.

The fact that all NHS care and most medication is free is a godsend, but the system needs major restructuring. I am convinced that if a massive reduction in the bill for desk-bound managers could be reallocated to clinical care and facilities, that would be a start. Watch this space.