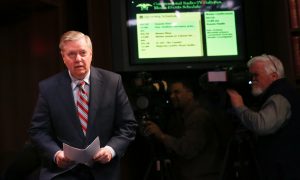 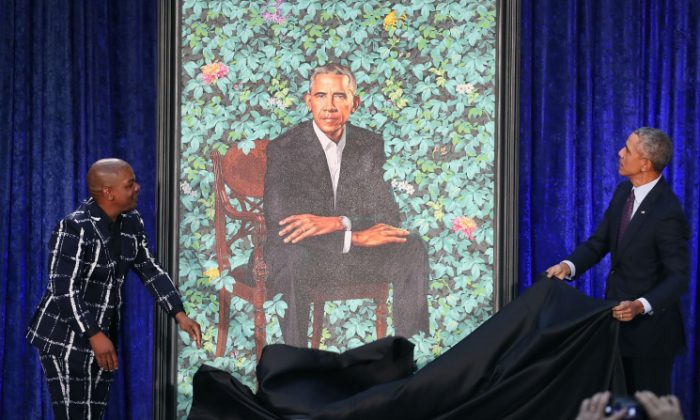 Former U.S. President Barack Obama (R) and artist Kehinde Wiley unveil his portrait during a ceremony at the Smithsonian's National Portrait Gallery, in Washington DC on Feb. 12, 2018. The portraits were commissioned by the Gallery, for Kehinde Wiley to create President Obama's portrait, and Amy Sherald that of Michelle Obama. (Photo by Mark Wilson/Getty Images)
Politics

The Obamas appeared in Washington on Monday, Feb. 12, to reveal their official portraits for the Smithsonian National Portrait Gallery, CNN reported. All former presidents have a portrait at the gallery.

The artist for Barack Obama’s portrait, Kehinde Wiley, is known for painting black people in the classical style mixed with a modern take on bright, colorful backgrounds.

But Wiley is also known for painting disturbing images of black women decapitating white people, at least two of which he posted on his Twitter feed.

Thanks @artnet for a great interview today with Heather Russell for #artnetinsights pic.twitter.com/kSYOLHPtNW

The majority of Wiley’s work that is available online is not as violent as the two decapitation paintings. The subjects of Wiley’s paintings are almost exclusively black. Of the 83 works featured on the Artsy website, the only white person is featured in the painting where she is decapitated.

It is unclear if President Obama was aware of the decapitation paintings before commissioning Wiley.

The artist for Michelle Obama portrait was Amy Sherald. Wiley and Sherald were the first black artists ever commissioned to paint a president or first lady for the Smithsonian.

For Obama’s portrait by Wiley, the former president is depicted sitting in a brown chair with a backdrop of bright green leaves and colorful flowers. Sherald’s painting of Michelle Obama shows her sitting with one hand under her chin and the other draped across her lap, while wearing a long flowing dress decorated with geometric shapes.

Obama, the first black U.S. president, complimented Sherald for her portrait of Michelle.

“I want to thank you for so spectacularly capturing the grace and beauty and intelligence and charm and hotness of the woman I love,” Obama said.

He quipped that Wiley, who painted his portrait, was at a disadvantage because his subject was “less becoming.”