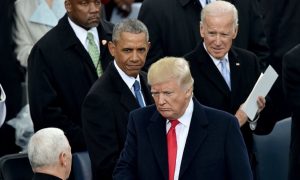 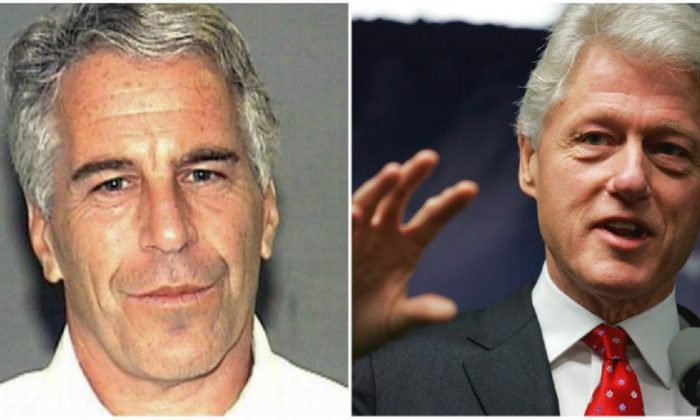 Artist Behind Clinton Painting Found in Epstein’s Mansion Speaks Out

The artist who created a portrait showing former President Bill Clinton in a blue dress and red heels that was found hanging in Jeffrey Epstein’s New York mansion said that she sold the painting at a fundraiser years ago and didn’t know who had bought it.

“In 2012, as a grad student at the New York Academy of Art, I painted pictures of Presidents Clinton and Bush as part of my Master’s thesis,” explained Petrina Ryan-Kleid in a statement obtained by the New York Post.

“When the school put on a fundraiser at the Tribecca Ball that year, they sold my painting to one of the attendees. I had no idea who the buyer was at the time.”

“As with most of my paintings, I had completely lost track of this piece when it was sold seven years ago. So it was a complete surprise to me to learn yesterday that it wound up in Epstein’s home,” she added.

Law enforcement sources previously told the paper that as soon as officers went into the home to serve a search warrant after Epstein’s arrest, the painting was seen.

“It was hanging up there prominently—as soon as you walked in—in a room to the right,” a source said. “Everybody who saw it laughed and smirked.”

Ryan-Kleid’s portrait of Clinton was listed on the website of the Saatchi Art Gallery in New York. The artwork was described as a realist pop culture painting.

A request for comment by Ryan-Kleid sent to the Saatchi gallery by The Epoch Times wasn’t returned.

The website described the artist as an Australian native who is now based in New York.

According to her bio on the site, Ryan-Kleid is a native of Australia, where she was commissioned to paint murals and where she won an award. The artist studied at Tertiary College in Brisbane before arriving in the United States in 2010 to study at the New York Academy of Art. She graduated in 2012 with a Master’s of Fine Arts.

“Petrina’s specialty is realism with a focus on satire. Her subjects are often politicians and celebrities. Petrina has exhibited her work in both Australia and the United States. Her most recent exhibit was in April 2013 at the Yashir Gallery in Greenpoint, Brooklyn. Petrina’s work is represented in public and private collections in the U.S. and Australia. She also teaches painting to beginners, intermediary and advanced students in private sessions,” according to the bio.

The news that the portrait was hung in Epstein’s mansion first emerged on Aug. 14, published by the Daily Mail.

A visitor to the mansion snapped a picture in 2012 of the painting. “It was absolutely Bill Clinton. It was shocking—it was definitely a painting of him. It was a very provocative, sexual picture. He was wearing heels, a blue dress and his hand was in a weird position,” the visitor told the Mail.

The portrait shows the man perched in a white chair, legs draped over the side as he leans the opposite direction, with one hand settled across his midsection and the other pointing directly at the viewer.

In the background are several more chairs, a bookshelf with books on them, curtains, and what appears to be a window.

Reports linked the blue dress to Monica Lewinsky, with whom Clinton had an affair while in the White House. Lewinsky told a friend in 1997 that she still had a blue dress that she wore during one encounter with Clinton, saying it bore a semen stain from an intimate encounter.

She ultimately turned the dress over to special counsel Ken Starr’s team and a blood sample taken from the dress concluded Clinton was the source of the semen.

Clinton was impeached by the House of Representatives over the affair on Dec. 19, 1998, but was acquitted by the Senate in February 1999.