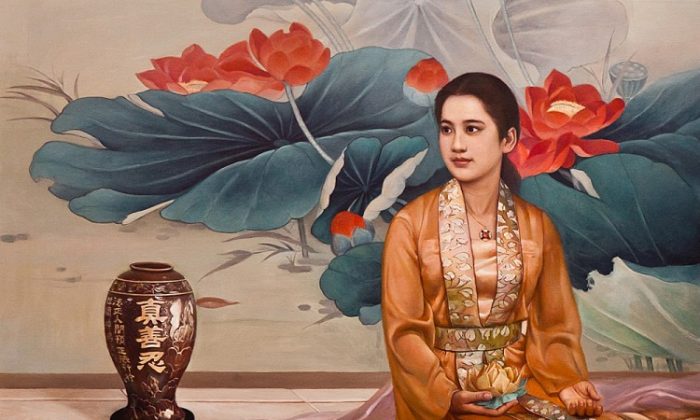 Oil painting "After the Parade" by Xiqiang Dong on display at the Zhen Shan Ren Art Exhibition at the Waldorf Astoria.
US

NEW YORK—Contemporary oil paintings in the traditional style, many depicting the persecution of Falun Gong practitioners in China, are on display at the Waldorf Astoria, until 10 p.m. Monday.

The Art of Zhen Shan Ren (Truth Compassion Tolerance) International Exhibition has traveled to more than 40 countries and 200 cities since July 2004. Of the 60 paintings in the collection, 13 are on display. Most of the artists are of Chinese descent.

“This one in particular really captured my attention. It just brings us back to reality about what’s happening in other parts of the world,” Crutchfield said.

The painting is set on a rainy Manhattan day. A young girl holds a placard reading, “killed for their belief,” as she stands near a Falun Gong anti-torture exhibit.

“Her eyes are showing conviction beyond her age, pleading the case to the world of the human rights violation,” William Cheung, one of the exhibition’s organizers explained.

Falun Gong is a popular practice of meditative exercise and self-cultivation that spread quickly in China through the 1990s. In 1999, owing to the practice’s widespread popularity and perceived challenge to the legitimacy of the regime, the Chinese Communist Party (CCP) began a harsh persecution. The campaign resulted in millions being sent to prisons and labor camps where they may be beaten, tortured, or subject to brainwashing in an attempt to have them renounce their beliefs. The campaign continues.

“It’s really beautiful, so beautiful,” Tessie Gainey said. “Is it a painting or a photograph? It’s so realistic.”

“It’s unbelievable, it’s so beautiful,” Mack Thompson said. “The work itself, just the way it stands out at you is incredible—it’s like a photograph.”

“It’s stunning. Each work represents a story that transcends into something bigger, and talks about life, and people,” Thompson said.

“It stuck out to me as soon as I saw it, the mom with her kid, the feeling of love,” said Fatou Diakite, looking at “Illumination,” by Xiaoping Chen.

The painting shows a mother holding her sleeping toddler as she reads the teachings of Falun Gong. The painting summary explains that the scene “signifies the harmonious balance that can be found between a rigorous spiritual life and regular family life. The gentle repose of the child mirrors the inner world of the follower of Falun Gong.”

For more information about the exhibition visit en.falunart.org