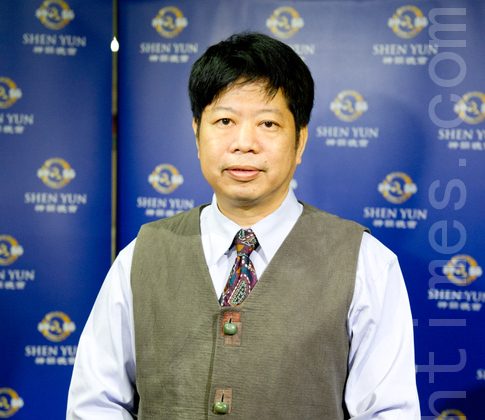 Ms. Xiuqin Xie, board member of the Performing Arts Union of Kaohsiung, said that watching Shen Yun makes her feel like dancing with the artists. (Xiu-E He/The Epoch Times)
News

A performance by New York-based Shen Yun is a presentation of traditional Chinese culture as it once was: a study in grace, wisdom, and the virtues distilled from the five millennia of Chinese civilization, states the company’s website.

Dr. Wang, a professor at the Department of Theater Arts, specializes in creation and stage design. “Fabulous!” Dr. Wang said after seeing the performance. “Shen Yun combines the essence of the East and the West and puts new ideas in culture. It’s not only entertaining but brings mankind meaning of life and courage of living.”

Dr. Wang praised Shen Yun for its promotion of traditional Chinese culture, which helps rebuild and enhance values and morality in society. “The world is fast changing and there are often calamities. We need this kind of art to rebuild our souls. Through Shen Yun’s brilliant performance, people are able to gain hope and life’s energy, and benefit from it,” said Dr. Wang. “I had a nice, joyful surprise from today’s performance.

“It makes me feel the importance of creation in art. There should be a spirit of variety and Shen Yun did just that. The piece I am most impressed with is Sleeves of Silk. The artists show the beauty of Eastern dance that can touch people’s souls with its beautiful and compassionate art.”

Xiuqin Xie said, “I have admired Shen Yun for a long time, and fortunately I had the opportunity to watch the performance today. What deeply impressed me was that from the beginning to the end, it depicted every dynasty very clearly. In addition, the costumes and the artists’ facial expressions were very exquisite. And the props was also wonderful.”

Ms. Xie particularly enjoyed watching the synchronization of the dancers and the seamless integration with the Shen Yun Orchestra. “What amazed me the most was the perfect synchronization between each musical note played by the live orchestra and the dancers.

“As a dance and painting lover, I watched the performance as if it were a painting in which the artists carried emotion into the paintings.”

She was particularly moved by the program Lotus Leaves. She said, “Seemingly like the lotus leaf fairy, every dancer completely adapted herself into the scenario of a flower, and swayed her body very naturally. In addition, I liked the prop fans very much, as the dancers performed with them very dexterously. I had tried to do some choreography. Today I learned a lot and gained inspiration from the performance. It’s really great!”

Xiuqin Xie also enjoyed the lyrics of the songs sung by the solo vocalists. She said, “While listening to the song What Is the Meaning of Life, we should ask ourselves what the meaning of our life is, so that we can be touched deeply and reflect what it means.”

In concluding, Ms. Xie said, “The choreography of each program was actually based on a very explicit theme, and the harmonization of the music and the costumes was perfect and remarkable.”